I’m a Southern gal through and through. Sassy, sarcastic, and just a tad crazy.
I spent my formative years doing the usual kid things – playing, hanging out with my friends, and making up wild stories in my head.
It’s the last one that’s gotten me into trouble.
I don’t remember the first book I read. Or the second. Or even the third. But somewhere along the way, I fell in love with books and reading. Fairy tales, fantasies, adventure stories, mysteries, romances, westerns. As a kid, I read every book that I could get my hands on.
My mom, bless her, encouraged this obsession by taking me to the library every week. It’s one of my favorite childhood memories. Most folks think penicillin, , and the Internet are the world’s best . Not me. The greatest thing ever created was a library. Indoor plumbing is a close second, though.
The more I read, the more I thought about writing my own stories. I penned a few poems and short stories over the years, mainly for class assignments. Somewhere along the way, I realized that I wanted to write books for a living.
In college, I majored in English because of my love of books. But what can you do with an English degree? I didn’t know. One semester, I got a job with the college newspaper and discovered you could write stories and make a respectable living. Since that light-bulb moment, I’ve earned a bachelor’s degree in English and journalism, and a master’s degree in professional communications. Currently, I’m an award-winning features page designer for a daily newspaper.
Now, after many, many years of toil and trouble, I’ve achieved my dream of being a bona fide, published, fiction author. I plan to keep on keeping on – writing, dreaming, making up wild stories in my head.
And getting myself into trouble.

I’d rather face a dozen lethal assassins any night than deal with something as tricky, convoluted, and fragile as my feelings.

But here I am. Gin Blanco, the semi-retired assassin known as the Spider. Hovering outside sexy businessman Owen Grayson’s front door like a nervous teenage girl. One thing I like about Owen: he doesn’t shy away from my past—or my present. And right now I have a bull’s-eye on my forehead. Cold-blooded Fire elemental Mab Monroe has hired one of the smartest assassins in the business to trap me. Elektra LaFleur is skilled and efficient, with deadly electrical elemental magic as potent as my own Ice and Stone powers. Which means there’s a fifty-fifty chance one of us won’t survive this battle. I intend to kill LaFleur—or die trying—because Mab wants the assassin to take out my baby sister, Detective Bria Coolidge, too. The only problem is, Bria has no idea I’m her long-lost sibling . . . or that I’m the murderer she’s been chasing through Ashland for weeks. And what Bria doesn’t know just might get us both dead. . . . 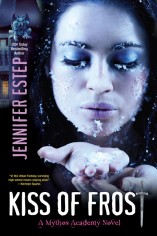 At Mythos Academy, teen warriors in the making train to take up their roles protecting humankind. With her snarky, self-deprecating voice and strange gift of psychometry - the ability to know an object's history just by touching it - Gwen Frost is an outsider both to the students of the Academy and the rest of the world. But now that she's taking private

with the Academy's most notorious young Spartan, and has Nike's own sword to protect her, she's ready to make mark...
Jennifer has been kind enough to donate A copy of Tangled and Kiss of Frost!
This is International!
This ends October 7th.
a Rafflecopter giveaway a Rafflecopter giveaway
Posted by Cynthia Garcia at 11:37 AM