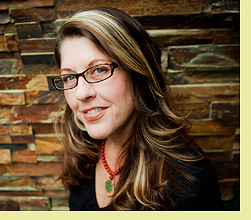 I'm a writer living in Northern California with my husband and two sons. I grew up with the serviceable last name of Jaynes, but then married a handsome Nigerian man, which is why my other last name has so many vowels.

I was born in New Jersey, but grew up in San Diego. Being almost 6 feet tall by the time I was twelve makes it painfully easy to remember my teen years. Even though I was really tall, I didn't like sports—but I did read a lot (and I mean a lot!) of books. Still, I never thought I'd be a writer. Except for a book called How the Rabbit Got His Hop that I wrote in third grade, I didn't write anything unless I had to. Every diary I've ever had stops on or about January 21st because I get bored writing about my own life. I've found that I do, however, enjoy writing about the lives of pretend people.

I didn't do the cheerleader thing in high school I did the... other thing. After high school I went to college at UC Santa Barbara. I majored in English but that was only because they made me decide when I was a junior and I'd taken more than anything else.

The best part of college was living in Scotland for a year. I was terrible at Spanish and never took French, which really narrowed down the year-abroad choices. I met some amazing people there who I still consider some of my best friends all these years later. I also learned how to travel by myself and that when you are on a crowded bus in Rome, don't wear a short skirt.

When I graduated, I kept going up the West Coast until I came to San Francisco where I lived in Haight/Ashbury for many years. Living in a big city after college gives you a lot of inspiration for stories later. I highly recommend it. I met my husband when I was working for a San Francisco weekly newspaper (in advertising, not writing).

After my kids were born, I stopped working and got to with them for a few years. One day, I was reading to my kids and I started thinking that there weren't enough books about biracial kids and maybe I should write one. How hard could it be? Turns out, it's plenty hard.

Several years and one giant learning curve later, I got an email from an editor who said she would like to buy my story When it's Six O'clock in San Francisco and it came out in July of 2009. Although I didn't have anything to do with the illustrations, I think they look great and I'm glad that chose Randy to do them.

After I'd been writing for a little while, one of my writing partners started writing novels and although it looked really hard, I thought maybe I should try it. Turns out, there are a lot of voices in my head and sometimes they have interesting things to say. I met my agent, Erin Murphy, in an elevator (really) at a writer's conference and when I finished my first novel, we signed together. My young adult novel Dirty Little Secrets came out with Walker Books in February 2010. Transcendence, a new novel about reincarnation and the choices we make came out in June 2012 with the sequel to follow in June of 2013. 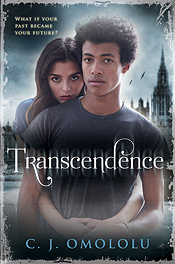 Everywhere Cole Ryan goes, everything she touches, seems to trigger vivid scenes of a time she doesn't know, in a place she's never lived. The only rational explanation is that she's losing her mind. Or is it?


Cynthia would like to giveaway a copy of Transcendence!
This is International!
This giveaway ends October 7th.

a Rafflecopter giveaway
Posted by Cynthia Garcia at 7:27 PM