Next up we have the wonderful author of The Talisman Trilogy and Mer Tales series. She is here with us today to make a few....confessions. :) 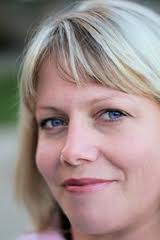 1. I’m a pantster writer (write by the seat of my pants), so I have no idea where the book will go until the scenes come to me. It’s built idea by idea with a general beginning and ending in mind.

2. I don’t typically write the plot in order either. I write my favorite scenes first then bridge them together later. Most all of my books kept their original scenes except for Evergreen. Lots of rewriting happened and I hated cutting out scenes. The end was rewritten three times and thus far has been my hardest novel to write.

3. Most all of my scenes are birthed during my morning shower.

4.  Research often freaks me out. One time I researched what happens when a car is submerged in water. If the engine is dead and you can’t roll down your window, you have to wait until the cab is completely filled before you can open the door. I watched a myth show about how difficult it was to get out, especially if the car turns upside down. The person inside (if it weren’t for rescue divers with him) would have drown before getting out. After watching that, I promptly purchased a tool that has a seatbelt cutter and window breaker because I don’t ever want to be trapped in my car, especially if my kids are with me.

5. I hide easter eggs in my books only my family would know to entertain them. It also helps me know if they’ve really read my books or not. I also honor friends by putting their names in as characters, too, and don’t tell them.

6. I’ve never aspired to be a writer until one day in 2008 when I decided to write a novel. Six months later, I had The Emerald Talisman. I’ve never looked back.

7. I rarely finish books I start. I’m very visual, so I enjoy TV and movies a lot more than reading, though I don’t watch much anymore (because I don’t have time). It’s a wonder I actually can actually write a novel in its entirety.

8. My 88 year old grandma has read all my novels, even my vampire ones. Phil is alive because of her. She said “I feel so sorry for Phil. He didn’t know what he was doing.” So, I gave Phil a second chance.

9. Julianna is the name I would have named my daughter if I had one. So, Julia is the daughter I never had.

10. Ferdinand in Evergreen is autistic because autism has touched our lives and is near and dear to my heart. Autism is the real reason I’m a writer. After my son’s diagnosis, I needed something happy to think about during the long grueling hours of therapy and challenges. My characters became the lifesaver that kept me afloat those two years of intense work. I hope Ferdinand touches you, too.

Here's some info on Brenda to know her a little better:

But really, my life is surrounded by the loves in my life--my husband and our incredible smart boys. Besides writing, I have a web-design business but previously worked for the State of California. After my son's autism diagnosis, my life turned upside-down and I had to quit. Being pregnant with #2 and giving birth right before we embarked on a 35 hour a week therapy schedule was grueling to say the least. Overnight my home turned into a train station with very little privacy. Although I was thankful for the specialized learning the tutors gave my son, I craved a meaningful escape.

So why vampires? I've always had an affinity for them, starting with Lost Boys, then Brad Pitt on the silver screen as Louis, the ever-beautiful anguishing vampire, in Interview with a Vampire and who doesn't adore Angel. Buffy the vampire slayer was an all time favorite as well. So I tried writing my own story. Yeah... it's a little more difficult than I imagined and my respect for authors everywhere has increased. But since you seem to like what I write and want me to keep going, I now have invoked on a journey in the ever mysterious deep waters and what lurks underneath... beautiful? or dangerous?

Before the ever glamorous life of pajamas pants and clacking on my lap top at odd times of the day, I was an IT geek and didn't aspire to pen my stories. But once I finally did take the leap, I found I had a ton to learn (and am still learning), but I discovered a new love to put on paper what I see in my minds eye--stories with romance, danger, and super powers. My characters continue to give me something exciting to think about when I wake up in the morning and originally rescued me during a very depressing time--and a paycheck too. That's always nice.

So, I really hope you enjoy my wild roller-coaster tales as much as I enjoyed writing them. Email me and let me know brendapandos(at)gmail.com! Or better yet, write a quick review on Amazon or B&N. That helps TONS!


Where to hunt her down: 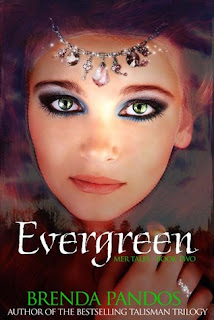 A kingdom on the brink of war.
A king on the fringes of insanity.
A family running for their lives.

Ash and Fin’s only desire is to be together and dive into their happily ever after, though their conflicting worlds work to pull them apart. Neither is ready to convert to the other’s life: become a human or a mer. Little do they know that somewhere in Natatoria a secret holds the fine fabric of everyone’s lives together. If the truth is discovered, Ash and Fin will no longer have the luxury of waiting. They’ll be forced to choose. But will it be for loyalty or love? Or will someone else make the choice for them if they can’t decide?

Enter the watery world of treachery, greed, and the binding mer kiss as the story continues with Evergreen, book two of Mer Tales.

Brenda would like to give 1 wonderful person a signed copy of Evergreen!
Sorry but this is US only. If you are International but have an US address you can use please enter.
All giveaways this month end on October 7th.
a Rafflecopter giveaway
Posted by Cynthia Garcia at 12:04 PM