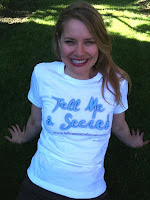 novels before she ever actually experienced teen romance. When she did, it became all about tragic poetry and slightly less tragic novels. She has worked with the Western Washington chapter of the Society of Children's Book Writers and Illustrators, been a readergirlz diva, and now serves on the board of the University of Washington Writing Program. When she isn't writing and making art, she spends time with her husband and daughter in , Washington. These days, her writing is less about tragedy and more about hope.

TELL ME A SECRET is her first novel, and her second, DON'T BREATHE A WORD, is now available from HarperCollins. Ten percent of the author's proceeds go toward World Vision's Hope for Sexually Exploited Girls. 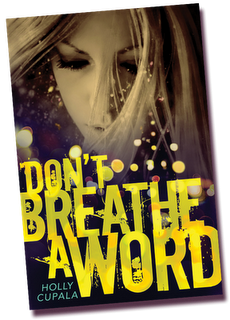 From asthma, which has nearly claimed her life. From her parents, who will do anything to keep that from happening. From delectably dangerous Asher, who is smothering her from the inside out.

Joy can take his words—tender words, cruel words—until the night they go too far.
Now, Joy will leave everything behind to find the one who has offered his help, a homeless boy called Creed. She will become someone else. She will learn to survive. She will breathe…if only she can get to Creed before it’s too late.

Set against the gritty backdrop of Seattle’s streets and a cast of characters with secrets of their own, Holly Cupala’s powerful new novel explores the subtleties of abuse, the meaning of love, and how far a girl will go to discover her own strength.

In the five years since her bad-girl sister's death, Miranda Mathison has wondered about the secret her sister took to the grave, and what really happened the night she died. When two lines on a her worst fears, Miranda must make a choice with tremendous consequences and finally face her sister's demons and her own.

In this powerful debut novel, stunning new talent Holly Cupala illuminates the dark struggle of a girl who must let go of her past to find a way into her future.
Holly would like to give a book away!
This is US only. If you are International and have an address you can use please enter.
All giveaways this month end October 7th.
a Rafflecopter giveaway
Posted by Cynthia Garcia at 9:41 AM