Today we have the wonderful Jennifer Lyon, author of the Wing Slayer Hunters series. I REALLY REALLY like this series. I have all of the books on my Kindle, Kindle Fire, and Nook :) and I also have the 1st 2 paperbacks personally signed to me all I need to get is Night Magic and Sinful Magic signed and on my shelf. (pssst...Jennifer where can I go to get those?) Now I am just  (not so) patiently waiting for Cage Magic.

But enough on me...here is Jennifer Lyon! 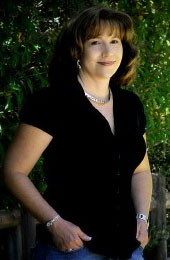 I wrote four books in my Wing Slayer Hunter Series when the publisher decided not to continue. I truly tried to “be realistic” and let go of the series. But the passion I felt for the tortured alpha witch hunters and their witches simply refused to die. Additionally, I was receiving email and messages from readers begging me to keep the series alive. Yet I kept hesitating on taking the leap into self publishing.

Then my college-aged son suffered a severe injury. A dream he’d been working toward for three years shattered with his leg. Watching his sheer courage and fortitude as he accepted that his reality had changed, and he determinedly looked ahead to carve a new one, changed my life view.

While taking care of my son, who for weeks could not even touch his foot to the ground for fear of collapsing his tibia (calf bone) entirely, I began working on carving out my new reality. I stole moments in the early morning, or while my son was in physical therapy, or whatever time I could to write FORBIDDEN MAGIC, a Wing Slayer Hunter E-Novella. My passion for writing burned hotter than ever, and I finished the novella. Here’s the blurb:

Wing Slayer Hunter, Ram Virtos, must find his soul mirror witch and convince her to mate with him before his Thunderbird tattoo kills him. But while that witch might be able to save Ram’s life, it is the mysterious Ginny Stone who inflames his passion.

Ginny has been deeply fascinated by Ram for months, but dared not act on it or she’d be torn from her mortal life on earth and thrust into her dreaded destiny as a half-breed angel. But when her beloved brother’s soul is at stake, she must do the one thing she both fears and desires…

Take Ram to her bed.

I have never loved writing a book more than I did this one. In the first four books of the series, BLOOD MAGIC, SOUL MAGIC, NIGHT MAGIC and SINFUL MAGIC, all the hunters must find their soul mirrors—the one witch who has the other half of their souls and will save them from a curse. But in this novella, Ram forges a different path, a new reality if you will. His story will continue through the next two Wing Slayer Hunter books (CAGE MAGIC and PRIMAL MAGIC) until Ram and Ginny have their own full length book. Believe me, they will more than earned their happy ending by then!

Much to my amazement, when I released FORBIDDEN MAGIC last April, readers snapped it up, taking it all the way to #28 on the Barnes and Nobles site. I was stunned. My email overflowed with reader letters. I don’t think I can ever express how much that meant, and continues to mean, to me. I write the stories because I have to, but you all read them because you want to and that is something I never forget.

Now, eight months later, my son has just returned to college and work. I am able to concentrate more fully on writing the next Wing Slayer Hunter books and hope to get them out faster. I’m working feverously on CAGE MAGIC. Please watch my website for the release date—it will be coming soon!

THE HUNTER AND THE HUNTED
In the days when powerful witches used their magic to shield humanity from demons, their allies and guardians were a group of men gifted with preternatural abilities of their own–the witch guardians. But when a band of witches traded their humanity for demonic power, the ancient bond was broken, and the guardians became the hunters.
Darcy MacAlister knows nothing of demons or magic. But this beautiful young woman is about to discover the truth about her past…and her future. For she is a witch–not just any witch, but the key to breaking the curse that has plagued witches and the men who hunt them. For if a hunter kills an innocent witch by mistake, the price is no less than a piece of his soul.
Axel Locke, gorgeous leader of the Wing Slayer Hunters, has sworn never to shed the blood of the earth witches who have resisted the temptation of demonic power. But when his sister is cursed by a demon witch, he discovers that Darcy MacAlister may hold the cure–if she can master her newfound powers in time. When the chase begins and Axel and Darcy come face-to-face, this hunter must weigh his soul against his honor–and against his heart.

KISS OR KILL
When an ancient pact is broken, powerful witches who once used their magic to help humanity become the twisted playthings of demons, and the mortal men who once protected the sorceresses become witch hunters, cursed with the longing to spill the witches’ blood: an irresistible craving that will cost witches their lives and witch hunters their souls.
The Wing Slayer Hunters fight this curse, guarding innocent witches until the urge to harm them grows too strong–then they must kill their own. Wing Slayer Sutton West has always honored that vow. His own father killed himself rather than go rogue. But now Sutton is tempted as never before by Carla Fisk, a brilliant psychologist and dynamic witch whose twin sister, Keri, was murdered by rogues.
Bound by blood and passion, Carla and Sutton dare not succumb to their deadly attraction. Yet when a mysterious rogue named Styx joins forces with the demon Asmodeus, witch and hunter have no choice but to work together. For Keri’s immortal soul is at stake–and with it, balanced on a knife-edge, is the fate of humanity itself.

THEIR LOVE IS DESTINED TO RISE AGAIN
Ailish Donovan is a witch ready to do battle. Raised unaware of her powers, she is just sixteen when her mother tricks her into binding with the demon Asmodeus. Pure-hearted Ailish escapes with the connection incomplete but pays a heavy price: For the next eight years, she is shunned by her earth sisters and tormented by Asmodeus’s lust. After hardening her body and mind as a champion kickboxer, Ailish returns home to break the bond—or die.
The Wing Slayer Hunter Phoenix Torq is sworn to protect earth witches, but he is shaken by Ailish’s fierce independence—and his own forbidden cravings. Dark, impulsive, and haunted by his troubled past, Phoenix likewise arouses Ailish in ways she finds disturbing—and irresistible. Torn between mistrust and desire, each must go to hell and back to seek the magic that could set them both free.

A FORBIDDEN LOVE WILL FULFILL HER DESTINY
Roxanne “Roxy” Banfield refuses to be like her mother, a fertility witch who uses sex as nothing more than a magical weapon. Roxy rejects that life and is determined to become mortal to pursue her dream of real love and a family. All she has to do is avoid meeting the one man whose sensuality can release her powers. But steering clear of this magnetic stranger is easier said than done.
Wing Slayer Hunter Kieran “Key” DeMicca channels the dark violence that lives inside him into a popular comic book series about an ancient dragon named Dyfyr, but only Key knows that Dyfyr is real. Lately he finds himself drawing images of a young woman in peril, and assumes that she’s just a product of his imagination—until he meets Roxy. Struck by her beauty and her resemblance to his sketches, he feels compelled to protect her. As steamy magic, lethal danger, and timeless love collide, Roxy must become what she swore she would never be—and inadvertently awake a part of Key that will threaten to destroy them both.

Wing Slayer Hunter, Ram Virtos, must find his soul mirror witch and convince her to mate with him before his Thunderbird tattoo kills him. But while that witch might be able to save Ram’s life, it is the mysterious Ginny Stone who inflames his passion.
Ginny has been deeply fascinated by Ram for months, but dared not act on it or she’d be torn from her mortal life on earth and thrust into her dreaded destiny as a half-breed angel. But when her beloved brother’s soul is at stake, she must do the one thing she both fears and desires…
Take Ram to her bed.


Thank you so much Jennifer for stopping by today! I also want to thank you for having the courage to continue to bring us this world!!

Jennifer would like to giveaway signed copies of Night Magic and Sinful Magic, an ebook copy of Forbidden Magic, and a set of Wing Slayer Hunters Trading Cards!
This  giveaway has US only prizes and an International prize!
If you are International and have an US address you can use then please enter the US giveaways.
All giveaways this month end on October 7th.