Next up we are celebrating our anniversary and a new release by participating in a blog tour! The new release is by Heather Hildenbrand, author of The Dirty Blood series. Heather is releasing her 3rd book, Blood Bond, in this series and let me just say I am a HUGE fan of this series. I am almost done reading reading Blood Bond so I will have a review for you guys soon. 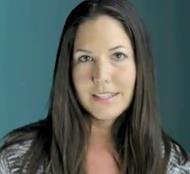 Heather Hildenbrand was born and raised in a small town in northern Virginia where she was homeschooled through high school. She now lives in coastal VA, a few miles from the Atlantic Ocean, with her husband and two adorable children. She works from home, part time, as a property manager and when she's not furiously pounding at the keyboard, or staring off into space whilst plotting a new story, she's helping her husband with DIY projects in their home (he woodworks - she paints) or she's lying on the beach, soaking in those delicious, pre-cancerous rays.
Heather loves Mexican food, hates socks with sandals, and if her house was on fire, the one thing she'd grab is her DVR player.
You can find out more about her and her books at www.heatherhildenbrand.blogspot.com
Or stalk her here:
Facebook
Facebook Fan Page
Twitter
Goodreads
Newsletter
Heather is a co-founder of Accendo Press, a publishing group she operates with fellow authors: Angeline Kace and Jennifer Sommersby. Accendo (a-CH-endo), A Latin word, means “to kindle, illuminate, inflame, or set fire.” This is something Accendo strives to do inside a reader’s imagination with every title released. For a complete list of titles and author bios, visit www.accendopress.com.

I am so excited! Today Heather is letting us into the mind of my all time favorite bad boy, Miles!! Here is a prequel to Dirty Blood in Miles view. Enjoy!

From my position in the trees, I could see them. The burly one was obviously the leader. The younger ones hovered around him, sparring and wrestling and going through the paces as he instructed them. I observed, as I had for the past three weeks. I studied how they moved, spoke, and interacted. They were like a family, although much more familiar and forgiving than my own familial experience. It intrigued me and the thought of joining with them, however contrived and calculated it might be, excited me in ways I could never admit to Father. What would it feel like to joke and trade insults as a brother might? To know you could walk down an alleyway and have your back protected?
As if conjured by my guilty thoughts, my phone buzzed silently against my thigh. I retrieved it from my pocket, knowing without looking who it would be.
“Hello, Father,” I said in a low voice. My eyes remained on the subjects.
“What’s your status?” he snapped, ignoring any familiarity with me. He always had.
“I have eyes on the targets.”
“You haven’t approached yet? What the hell are you waiting for, a formal invitation?”
I bristled but otherwise ignored the comment. “I wanted to get a feel for them first. I told you that.”
“Feel? You sound like a female. Be the soldier I raised you to be and make the approach already.” He broke off and snapped an order at someone else in the background.
“Is everything all right?”
There’s been a … development.”
I frowned. The excited way he said it confused me. “Is that good?”
“I’ve found her. My brother’s little monster.” He laughed harshly. “Make the approach, Miles. We’re in the home stretch.”
My gut tingled at that. He’d found the girl. The one like me. The only other mixed race alive. And Father had found her. What would she look like? Would she recognize me as someone like her?
I doubted it, since father had assured me that I no longer registered as a werewolf on his internal radar. I could barely remember what it felt like to shift anymore. I hadn’t done so since I was eight. It had been an accident and there’d been hell to pay for it. I hadn’t made that mistake again. Father wanted me to be a Hunter, as far as the supernatural world knew. He thought it would open more doors. Until the time was right. After we’d won, I could be whatever I wanted. Now, I wondered if I could shift even if I wanted to.
“Did you hear me?” he snapped.
“Yes, Father. I’ll call you when it’s done.” I hung up and willed myself to focus. The Cause members were packing it up and heading inside. The burly leader remained. Now was the time.
Infiltrating The Cause had been my idea, after all. Father would’ve been recognized but I’d grown up in the forested mountains of the Shenandoah. No one would recognize me because no one knew I existed. And if any group was poised for political power between Hunters and Werewolves, it was these peace-seeking freedom fighters. They had no idea how much power they held. Or the threat they were already perceived as by the government they so callously ignored.
Even without the girl, once I was a part of their ranks, and trusted enough to sway the vote, it would be easy.
With her, victory would be sweeter.
*SQUEEEEEEEEE* Okay...breathe in breathe out.

Heather would like to offer 1 person an ecopy of Blood Bond.
This is International!
All giveaways this month end on October 7th.

a Rafflecopter giveaway
Posted by Cynthia Garcia at 3:29 PM