Next up it's the fantastic author Amanda Bonilla! She is the author of Shaede Assassin series. So, when I first saw what she is sharing with us I think I read it like 10 times lol. She brings up ALL my favs...you'll see :) But first; here is a little more about Amanda. 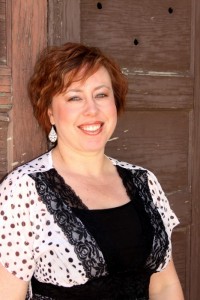 Amanda Bonilla lives in rural Idaho with her husband and two kids. She’s a part-time pet wrangler, a full-time sun worshipper, and only goes out into the cold when coerced. She loves the outdoors, black clothes, pink appliances and thinks junk food should be a recognized food group. In the summer, she can be found sitting by the lake, enjoying the view from her dock.

Take it AWAY Amanda!!!

Thanks so much to Cynthia and Book Reader Addicts for inviting me to join in the anniversary festivities. Congrats on hitting the two-year mark!

One of my favorite characters in the Star Wars franchise is Lando Calrissian. Even though his role is relatively small in the movies, his character is indispensable to the over-all story. Without him, Han wouldn’t have been turned over to Jabba and Leia would have never fallen into Darth Vader’s hands. And, without him, there wouldn’t have been a daring rescue, either. There’s something that I find appealing about a character that can charm you one second and stab you in the back in the next. These characters, while genuinely likeable, can easily be classified as protagonists. I can’t help it, I love a charmer! And here are a few examples of some great “Lando” characters.

Ian – From the Night Huntress Series
Okay, so Ian is sort of borderline for me as a Lando character, but I still love him! Ian is incredibly charismatic, but he’s also self-serving. The only person, vampire, or other creature Ian is concerned with is Ian. Plain and simple. He’s the type of character who subscribes to the theory that it’s better to beg forgiveness than to ask permission. He might do things that drive his friends crazy, but in a pinch, you can bet Ian knows whose side he’s one.

Lothaire
Even the Valkyries, ancient rivals of the Enemy of Old, can’t help but admit that there’s just something about the half-mad, sexy vampire that’s claw-curling. Like Ian, Lothaire is only concerned with himself. And in the case of the IAD series, his endgame. Throughout the series, Lothaire tips the scales, helping his foes in one instance, and throwing them to the wolves in the next all in the interest of making sure all outcomes benefit him. He’s not especially polite, and he can be a little creepy at times, but I have to say, his character is magnetic. Lothaire draws the reader in and doesn’t let go. I can’t wait to see more of him in future novels!
Lestat
I’m a huge Anne Rice fan. I think that Lestat may be one of the most charismatic characters I’ve ever read. At times, it seems this centuries-old vampire has no conscience whatsoever, and just when you’re about to write him off, he does something, or you learn details about his past that redeems him. But just because he has his moments, it doesn’t mean that Lestat won’t turn his head and look the other way if need be. Especially if it benefits him in the long run.

Captain Jack Sparrow
If Lando Calrissian was a pirate, he’d be Captain Jack Sparrow. Even Han admits that Lando isn’t always on the up-and-up and the same can be said of Captain Jack. (In fact, the Millennium Falcon was gambled away. If that doesn’t make Lando a pirate, I don’t know what does.) Captain Jack is charming. He has a lady at every port. And his crew will follow him to the ends of the world, so he’s obviously charismatic. Time and again, Captain Jack has double-crossed his so-called friends.  And time and again those “friends” return, ready to fight, and even to trust this fast-talking, side-stepping pirate. Because you never know, the next time might actually be the time he’ll fight for his comrades instead of turning his back on them. He’ll do it all with a cocky smile on his face, too.

Can you think of a character that fits the Lando Calrissian archetype? Who are some of your favorite charismatic, double-crossers?

Darian has lived alone for almost a century in the shadows of the night. Made and abandoned by her former love, Darian is the last of her kind—an immortal Shaede who can slip into darkness as easily as breathing. With no one else to rely on, she has taught herself how to survive, using her unique skills to become a deadly assassin.

Darian finds herself struggling to keep her employer Tyler at arm’s length, especially since his seductive smile makes her want to break her rules about love. The work he offers is necessary to protect the innocent—and a welcome distraction. But when Darian’s next mark turns out to be Xander Peck, King of the Shaede Nation, her whole worldview is thrown into question. Darian begins to wonder if she’s taken on more than her conscience will allow, but a good assassin never leaves a job unfinished… 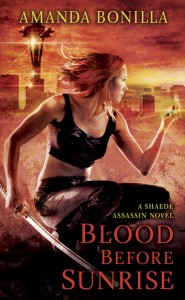 For months Darian and her Shaede guardian Raif have searched for the Oracle who attempted to overthrow the Shaede Nation—and kill Darian in the bargain. But now that they’ve finally found the half-crazed Oracle, for their efforts they are granted a possibility too painful for Raif to imagine, and too enticing for Darian to ignore.
Darian is determined to reunite Raif and the daughter he thought was dead, but her mission quickly proves dangerous when her lover Tyler is almost killed. And when a brooding and mysterious Fae warrior offers his guidance—at an extraordinary price—Darian finds herself willing to risk everything. As her single-minded hunt turns into an obsession, and she and Tyler grow further apart, Darian finds herself caught between the man she loves like a brother, and the man whose love she can’t live without…

Thank you Amanda so much for stopping by and celebrating with us!

Amanda would like to giveaway 1 copy of Blood Before Sunrise!
This giveaway is for US/Canada only. If you are International and have an address you can use then please enter. **wish I could enter!**
All giveaways this month end October 7th.

a Rafflecopter giveaway
Posted by Cynthia Garcia at 10:34 AM