Scott Prussing is the author of the popular four book (so far) paranormal romance series The Blue Fire Saga (Breathless, Deathless, Helpless and Fearless) as well as two mystery/suspense novels (Unturned Stones and Tangled Webs). He is also the author of a fantasy/adventure novel (Dreams of the Last Born) and the teen romance ebook Mine: A Love Story, whose plot is based on the hit songs of Taylor Swift.
Scott has from the University of Connecticut and . After , Scott was smart enough to move to beautiful San Diego, California, where he lives just four blocks from the ocean. In addition to writing, Scott enjoys going to the movies (not renting!), hiking, riding his bike along the coast, and golf. He remains one of the few people in the United States without a cell phone. 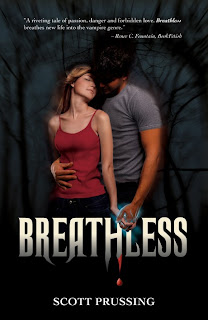 College freshman Leesa Nyland has been fascinated by vampires since she was three years old. That’s when her mom started acting weird, refusing to go outside during the day and insisting the sunlight hurt her skin because she had been bitten by a one-fanged vampire…

But fascinated doesn’t mean Leesa believes—any more than she believes in blue fire, people who live for centuries, and kisses that can kill. When her beloved older brother suddenly disappears, she is forced to confront all these and more.

Scott would like to giveaway a copy of Breathless!
This is US only. If you are International and have an address you can us please enter.
All giveaways this month end October 7th.

a Rafflecopter giveaway
Posted by Cynthia Garcia at 9:26 AM