I am really excited to introduce you all to this author. Her name is Amalie Howard and she wrote the YA novel, Bloodspell. I fell in love with this book and I eagerly waiting for the next one.

Today she will be talking to us about musical inspiration in Bloodspell. 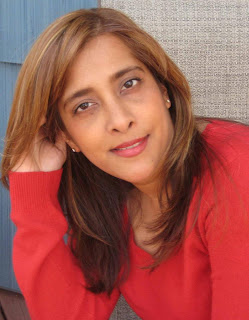 When I’m writing, there’s one thing that I absolutely need. Cupcakes, you say? Well, I can’t deny the magical lure of the cupcake but too many of those and instead of writing, if you’re anything like me and have severe impulse control issues, you’ll probably be climbing the walls. So I tend to opt for the non-caloric, non-sugary kind of inspiration. Like music!

The right piece of music can make a scene flow magically, whether it’s a romantic scene or an action sequence, or even help shape a relationship between two characters. Sometimes I’ll have a certain song on repeat depending on the scene I’m writing. I played Bleeding Love by Leona Lewis a few hundred times while writing BLOODSPELL! Obsessive, I know. But if the creative juices are flowing, I don’t argue.

For me, Bleeding Love really embodied the relationship in the beginning of BLOODSPELL between Tori and Christian. If you listen to the lyrics, you’ll understand some of the struggle she finds herself in—the pull to this magnetic boy that everyone keeps warning her to stay away from. Even the heartbeat-like beat of the song added to my own sense of tension and angst while writing. On top of that, the theme of blood was pretty relevant to my story so I liked that connection, especially the whole idea of blood versus love versus life. “My heart’s crippled by the vein that I keep on closing—you cut me open and I keep bleeding, keep, keep bleeding love.” These song lyrics were incredibly powerful in terms of communicating Tori’s overwhelming feelings for Christian, when every instinct inside of her was warning her to flee in spite of them. And then of course, the clincher: “Nothing’s greater than the risk that comes with your embrace.” If that doesn’t apply to being with a boy from the wrong side of the tracks (or a vampire), I don’t know what does. And this works both ways because Victoria’s embrace is as dangerous for Christian as it is for her! After all, her witch blood can kill him.

Already Gone by Kelly Clarkson was another song that helped develop some of the more emotional scenes between Christian and Tori, especially the break-up scenes toward the middle of the book. All of the odds are against them—they’re from two polarized worlds that hate each other. “You can’t make it feel right, when you know that it’s wrong.” They’re trying to be together but deep down, they know that things may never work out between them because they are forbidden to be. Then they just end up hurting the other or putting each other in danger. As a result, Christian feels a huge amount of protectiveness toward Tori, and even though he’s in love with her, he’ll let her go if she’ll be safer without him. “Started with a perfect kiss then we could feel the poison set in. Perfect couldn’t keep this love alive. You know that I love you so, I love you enough to let you go.” Again, the lyrics in this song were so powerful because they’re so full of love and bittersweet heartbreak that they really helped to drive these scenes and all of the emotion of the characters behind them.

When I was writing the scene with the relationship between the two brothers however—Christian and Lucian—I needed something way more gritty and intense so I went with The Hand That Feeds by Nine Inch Nails. There’s so much emotion between them as siblings, or even worse, as twins, that it’s a very unpredictable dynamic. Take that relationship to the vampire level—especially between one who loves what he is and the other who hates what he is—and you have something incredibly volatile. This piece of music and the words in the song are so perfect because there’s such an explosive combination of hate and love between them, if only because of who and what they are—vampires. “But inside your heart it is black and it's hollow and it's cold … What if this whole crusade's a charade, and behind it all there's a price to be paid, for the blood, on which we dine.” This song really helped me to immerse myself into the darker side of their nature, especially for the vampire fight scenes in Paris. The flip side of this fiery dynamic is I Don’t Care by Apocalyptica. There’s the same kind of hardcore emotion between the two boys, but a little more painful sadness threaded in through the music and the lyrics. This is Lucian’s song for Christian. “I try to make you see my side. Always trying to stay in line, but your eyes see right through. That's all they do.” This song worked well as a counterbalance to the Nine Inch Nails track because it’s so fraught with dark, intense but aching emotion—and a basic need for acceptance. There’s a lot of pain and vulnerability in this song, underlying all of the anger, and this combination really helped me to express the murky love/hate relationship between the brothers. I still get goose bumps listening to the despair behind the words in the song.

My last example is the French song by Celine Dion, Pour Que Tu M’Aimes Encore. It is Christian’s song for Tori. I know it’s in French, but some of the lyrics of this song are just so deep, you can feel them in your toes. Loosely translated by moi, the lyrics mean, “You have to know, I will search for your heart if you take it anywhere else … I will search for your soul in ice or in fire. I’ll cast a spell so that you’ll always love me.” Swoon. And of course, it’s in French. Seriously, what could be more romantic than that? Anyway, not to be a sap or anything, but this song helped me to shape some of the more emotional romantic scenes between Christian and Victoria, particularly from Christian’s perspective. The fact that it’s a French song was just a bonus since Christian is, after all, French!

BLOODSPELL aside, music is inspirational overall in my writing. I keep a playlist for every book I write, and even though some of the songs may overlap here and there, surprisingly, they don’t most of the time. I recently met another author who collects old books of photography for scene-setting inspiration, and I know of another whose writing inspiration comes from watching videos on YouTube. Someone once told me that art begets art, and in this case, music certainly does it for me. So whatever gets your creative energy moving, grab ahold of it and use it!

You can check out my playlist for BLOODSPELL at the back of the book, which is lined up with corresponding chapters/scenes/characters, for more on my musical inspiration while writing this novel. You can also find the full electronic playlist here: http://bloodspellbook.com/the-playlist/.


Want to know more about Amalie?

AMALIE HOWARD grew up on a small Caribbean island where she spent most of her childhood with her nose buried in a book or being a tomboy running around barefoot, shimmying up mango trees and dreaming of adventure. She received a bachelor’s degree from Colby College in Maine in International Studies and French, and a certificate in French Literature from the Ecole Normale Supérieure in Paris, France. She has also lived in Los Angeles, Boston, and New York City. She has worked as a research assistant, marketing rep, global sales executive, freelance writer, and blogger. A lover of other cultures and new experiences, especially of the culinary variety, she has traveled extensively across North America and Europe, and as far east as China, Indonesia, and Australia. She currently resides in New York with her husband, three children, and one very willful cat that she is convinced may have been a witch’s cat in a past life.
Amalie Howard’s debut novel, Bloodspell, evolved from a short story that took on an eerie life of its own, and is undoubtedly the result of a lifelong infatuation with witchcraft, vampires, and excessive amounts of chocolate. 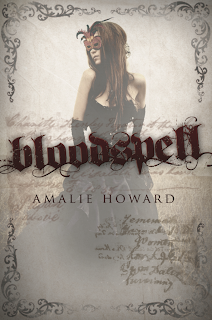 But what do you do if your blood is your enemy?
Victoria Warrick has always known she was different. An outcast at school, she is no stranger to adversity. But when she receives an old journal for her seventeenth birthday, nothing prepares her for the dark secrets it holds—much less one that reveals she’s a witch with unimaginable power.
What’s more, when she meets the dazzling but enigmatic Christian Devereux, she has no idea how much her life is about to change. Enemies will hunt her. Friends will turn on her. The terrible curse that makes her blood run black will stop at nothing to control her. And Christian has a sinister secret of his own …
Without knowing whom to trust, can Victoria survive her blood’s deadly desires? Or will she lose everything, including herself?

Amalie would like to give 1 person a copy of Bloodspell to celebrate!
Thia giveaway is International!
All giveaways this month end on October 7th.

a Rafflecopter giveaway
Posted by Cynthia Garcia at 9:45 AM