I would like to introduce you all to Ednah Walters! She is the author of my favorite adult series, The Fitzpatrick Family series and the YA series A Guardian Legacy.

I fell horrible...I was to have a review ready for Betrayed (A Guardian Legacy novel) but I have had some health issues come up and reading has been delayed. I will have it for you all very very soon. My deepest apologies Ednah.

Here is a little about Ednah to get to know her better:

I enjoy good love stories, tingly mysteries and epic adventures. When I finished my college and decided to be a stay-at-home mother, I devoured books like they were going out of production, until reading just wasn't enough. So I started to write.

I've written picture books (unpublished), contemporary and romantic suspense (under the pen name E. B. Walters), and finally YA fantasy (as Ednah Walters).

AWAKENED (2010) is the prequel to the YA series about the Nephilim, The Guardian Legacy series. BETRAYED(book # 1) is now available wherever books are sold, HUNTED(book # 2) will be released in February 2013 and FORGOTTEN(later in the year 2013).

When I'm not writing, I do things with my family, five children and my darling husband of 18 years. I live in a picturesque valley in northern Utah, the setting for my YA series. 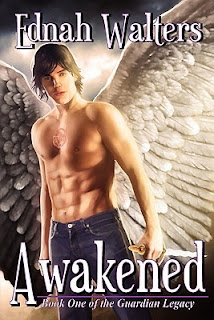 Most teens turn sixteen and get the license to drive, but Lil Falcon gets the license to kill demons. Orphaned as a child and raised by an eccentric grandfather, Lil is concerned with surviving high school and is unaware that she's a Guardian-a being with super powers charged with killing demons and protecting humanity. When she meets Bran, a mysterious boy with amazing abilities, his psi energy unlocks her latent powers. But Bran has a secret that can ruin their growing relationship, and the truth she discovers may destroy everything she believes in unless she finds the right balance between love and sacrifice. 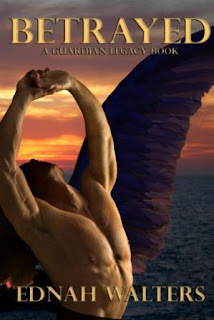 Lil isn't just an average teenager. She's one of the Nephilim--the descendants of humans and angels--which gives her some serious psi skills and a mission for redemption. Just when Lil thinks she's found a balance between her normal life with human friends and her training to become a Guardian, she's warned that someone close to her will betray her. When the boy she loves starts acting strangely and one of her human friends acquires a supernatural ability, Lil begins to realize that someone is manipulating the people she loves... and won't stop until she's been lured to the dark side.

Ednah is graciously offering 1 person a copy of Betrayed.
This is an International giveaway!
All giveaways this month end on October 7th.
a Rafflecopter giveaway
Posted by Cynthia Garcia at 9:46 AM