Today we have K.A. Tucker, author of the Casual Enchantment Series. She is here to talk to us about writing a series.

Why Writing a Series Can Kick Your Butt

I try to write guest posts about other "stuff" besides my books.  Here I am now, writing a post about...my book. Well, it's more about writing a series in general. When I started writing ANATHEMA three years ago, I was pumped. I mean, who doesn't love a good series! You get to watch the characters grow and change over hundreds of thousands of words. And there I was, writing one.
Fast forward three years. I just hit "publish" on ALLEGIANCE, the third in the series, and I'm exhausted. Don't get me wrong, I'm still pumped! I love this story and its characters and how far they've all come. I think it's my favorite one in the series (Shhh! Don't tell the others...)
But it kicked my butt.
Why? Because I was under the delusion that writing a series might be easier. Your characters are created, the premise is there. Now it's just a matter of the adventure, right?
Mama says you're WRONG! (To quote the all-knowing Water Boy).
Writing a series is freaking hard. When it's your first step into the publishing world, it might be insane. It takes bags of cookies and chocolates, bottles of wine, at least three sizes of stretchy pants...
You need to remember who said what and when and to whom, two books ago. You hope to heck that the new twist you've come up with can be linked back to something 90,000+ words ago. You need to ensure your characters are growing and changing through ALL of the books. If you kill someone in Book Two, you don't accidently resurrect them in book three (it's easier to do than you think). You spend half the book answering questions from the previous book and the other half building threads that will weave nicely into the next book, hoping to heck you've kept it vague enough that if you're inspired into a new direction, it all still fits... confused yet? Note - this last one is an issue if you're like me and you don't plot the entire series out before writing. Yeah - that's right, I have NO CLUE how this series will end. There, I said it!
In a series, you're need to give the reader enough that they feel satisfied about how the book ended but are itching to get their hands on the next one. There's an art to it, I'm learning. Too much cliff hanger and not enough closure and people get pissed off. You want them sending you excited, "Are we there yet?" emails and tweets for the next book, not, "You're the devil, I hope your hair catches fire," messages. The first few weeks post-release are the most nerve-wracking, waiting to find out if your readers are continuing on for the ride or standing outside your door with a pitch fork and burning torch. (Given I just released ALLEGIANCE, know that as I type my toes are crossed and I have two Oreo cookies shoved into my mouth.)
So...yeah. This series kicked my butt big time.
And it ain't over yet
Grab ANATHEMA if you haven't picked up the series yet. It's free in e-book format.
K.A.Tucker 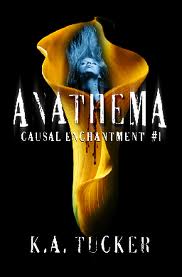 Evangeline has spent her teenage years in obscurity. Her foster parents have the emotional aptitude of robots and her classmates barely acknowledge her existence. About to turn eighteen and feeling like a social pariah, she is desperate to connect with someone. Anyone.

When Evangeline meets Sophie after literally stumbling upon her café, she believes she’s found that connection. Willing to do anything to keep it, she accepts a job as Sofie’s assistant and drops everything to fly to Manhattan, where she is thrust into a luxurious world of Prada, diamonds, and limitless cash.

With such generosity and kindness, it’s easy for Evangeline to dismiss certain oddities... like Sofie’s erratic and sometimes violent behavior, and the monstrous . She’s even willing to dismiss her vivid dreams of mob-style murders, beautiful homeless people living in caves, and white-eyed demons that haunt her each night as figments of her imagination—especially when one of those figments is the gorgeous Caden. When she wakes up with bite marks on her neck, the fairy tale quickly turns into a nightmare. She slowly unravels the mystery surrounding Sofie and friends, and the reality of the bites and the “dreams.” What she discovers is far more mysterious and terrible than anything she could have imagined.

In a world where everyone has motive to lie for personal gain, Evangeline must decide which deception is least likely to get her killed. 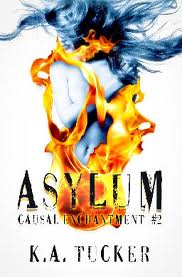 Tucked away in Sofie's wintery asylum with no hope of release for years, Evangeline must come to terms with her situation: the curse still plagues her, she's now hunted by a
two thousand-year-old vampire, and the guy she's in love with tried to kill her.
Plus, she's locked up with a cranky Max and the Forero kids—two people everyone
seems to prefer dead over alive. Things aren't looking good.

Meanwhile, back in Manhattan, Sofie struggles to keep forty trapped and bloodthirsty Ratheus vampires at bay and a desperate Viggo from killing Evangeline's friends, all
while hints stir outside the walls of the NYC vampire asylum of a war brewing
between the Sentinel and the witches.

Is there any hope for Evangeline and Caden? Can Sofie control the rival powers? Is the fate of
Earth predestined? 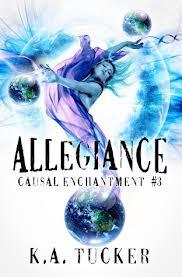 Evangeline finally got what she longed for – the cursed pendant off her neck and Caden in her arms - only it has come at a steep price. An unknown poison now through her body, slowly morphing her into something no one but the Fates can foresee. She has her suspicions though...and, if she is right, it will spell certain ruin for her and Caden. She won’t last long enough to realize that though, if Viggo and Mortimer uncover the treasonous secrets she keeps from them– that Veronique is now free of her entombment and in the torturous clutches of the Witches and the Sentinel or that she is protecting a Sentinel within their very midst.
Always the naive human caught in the midst of the vampires’ web of deceit, Evangeline is now weaving her own dangerous web in order to keep her friend alive, rescue Veronique, and stop a seemingly inevitable war from starting. But can her honorable nature handle the depths of duplicity for which she must go to be in league with the Vampires?

Dark and gripping, full of angst-riddled scenes, Allegiance will have readers anxiously turning pages to find out if Evangeline can survive this spiraling disaster.
Thank you K.A. for stopping by!

K.A. would like to give a gift away.
This is International!
All giveaways this month end on October 7th.

a Rafflecopter giveaway
Posted by Cynthia Garcia at 8:37 AM