Kendall Grey is a whale fanatic and professional dreamer who writes urban fantasy, erotica, and horror on the side. She lives near Atlanta, Georgia with her ghost husband, a random rainbow, a gossamer-winged fairy, a wild imp, and a ferocious miniature long-haired Dachshund who keeps them all in line. 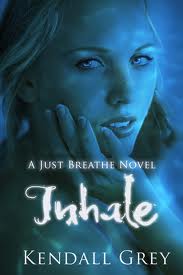 Strangers in reality, inseparable in dreams...

After years of suffocating under her boss's scrutiny, whale biologist Zoe Morgan finally lands a job as director of a tagging project in Hervey Bay, Australia. Success Down Under all but guarantees her the promotion of a lifetime, and Zoe won't let anything--or anyone--stand in her way. Not the whale voices she suddenly hears in her head, not the ex who won't take no for an answer, and especially not the gorgeous figment of her imagination who keeps saving her from the fiery hell of her dreams.

Gavin Cassidy hasn't been called to help a
Wyldling in over a year, which is fine by him. Still blaming himself for the death of his partner, he keeps the guilt at bay by indulging in every excess his rock star persona affords. That is, until he's summoned to protect Zoe from hungry Fyre Elementals and learns his new charge is the key to restoring order in the dying Dreaming. He never expects to fall for the feisty Dr. Morgan...nor does he realize he may have to sacrifice the woman he loves to save an entire country.

Her dreams brought them together, but reality could tear them apart...
The man of Zoe Morgan's dreams isn't only real, he's interested. In her. But her boss wants her too, and is leveraging his unsolicited advances with the threat of blocking the huge promotion she's after. When he places a spy on her research team, the intense stranger discovers more than he should, and Zoe fears hiding a relationship with Gavin Cassidy from her boss is the least of her worries. The whale she must protect has been marked for death, and Zoe's old enemy Scarlet is eager to deliver the killing blow. To both of them.

Australia's Sentinels must find and

into the Dreaming before Fyre Elementals launch another attack on innocent dreamers. But corruption and distrust abound, and Gavin believes someone on the Sentinel council is in league with the Fyres. As he reluctantly embraces his new role as council leader, Gavin must not only keep Zoe safe from Scarlet's vengeful clutches, but organize a Sentinel defense strong enough to prevent a full-blown Elemental war--with a traitor fighting by his side.

To help us celebrate Kendall would like to giveaway an ecopy of Inhale and an ecopy of Exhale.
This is International!
All giveaways this month end October 7th.

a Rafflecopter giveaway
Posted by Cynthia Garcia at 4:14 AM