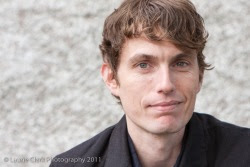 Kevin is the author of the OLIVER NOCTURNE SERIES and CARLOS IS GONNA GET IT. His next novel, THE LOST CODE, the first book in the Atlanteans series, comes out in May 2012 with Katherine Tegen Books. His next middle grade novel, THE FELLOWSHIP FOR ALIEN DETECTION, comes out in January 2013 with Walden Pond Press.
Kevin is also a musician. His current project is THE BOARD OF EDUCATION, where he writes imaginative, poppy songs about elementary school and life in the spirit of Schoolhouse Rock.
A former elementary teacher, Kevin continues to work with kids and teens at 826 Seattle, Richard Hugo House, and with the Writers in the Schools program of Seattle Arts and .
Kevin grew up in Cheshire, CT, where he wrote stories all the time, played in the marching and jazz bands, and ran track. One time, he won a spelling bee, prevailing over his ex-girlfriend in the final round. Another time, as a contestant in the Mr. Cheshire pageant (a benefit: not a real pageant), Kevin chose to wear an actual suit of armor as his 'formal wear.' He didn't win.
Kevin went to Colby College in Waterville, ME. As a sophomore, he was excited to begin the creative writing program, but instead was given his alternate class: Painting. He ended up loving painting and kept writing stories on his own. He also played in the jazz ensemble, and sang in the Chorale, and ended up majoring in Biology. He spent a semester in Kenya studying wildlife conservation.
Kevin moved to Boston after college, where he briefly worked as a bank teller, and then as a camp counselor, before getting a job as an elementary school science teacher (and he found that he loved teaching!). He kept writing stories, and kept playing in bands. While he was teaching, he got excited about books for young readers, and set out to write his own. He had two near-misses, and his third manuscript, CARLOS IS GONNA GET IT, landed him his first book deal.
Now living in Seattle, Kevin is still writing stories, playing in bands, and teaching.

The ozone is ravaged, ocean levels have risen, and the sun is a daily enemy. But global climate change is not something new in the Earth's history.
Now, it is less-than-ordinary Owen's turn to make right in his world what went wrong thousands of years ago. If Owen can unlock the lost code in his very genes, he may rediscover the forgotten knowledge of his ancestry... and that less than ordinary can evolve into extraordinary.

Kevin would like to giveaway a copy of Lost Code!
This is US only. If you are International and have an address you can use please enter.
All giveaways this month end October 7th.

a Rafflecopter giveaway
Posted by Cynthia Garcia at 9:24 AM