Mari Mancusi used to wish she could become a vampire back in high school...

But she ended up in another blood sucking profession --journalism -- instead. Today she works as an author of books for teens. When not writing about creatures of the night, Mari enjoys traveling, cooking, goth clubbing, watching cheesy horror , and her favorite guilty pleasure--videogames. A of University and a two time Emmy Award winner, she lives in Austin, Texas with her husband Jacob, daughter Avalon and dog Mesquite. 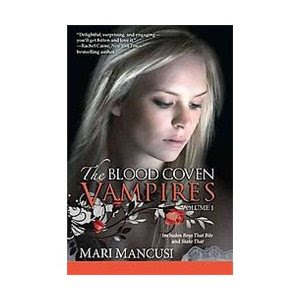 The first two Blood Coven Vampire novels-now in one volume.
Boys That Bite
When Sunny McDonald's sister drags her to Club Fang, all she expects is a bunch of Goth kids playing at being vampires. But when a tall, handsome stranger mistakes Sunny for her dark-side-loving twin and bites her on the neck, she realizes his fangs are real-and deadly...
Stake That
Rayne McDonald had it all figured out: become the vampire mate of the Blood Coven master and live the high life for all eternity. But now, not only is Rayne fangless, but she discovers she's destined to be a vampire slayer instead...and sexy vampire bad boy Jareth keeps getting in her way. 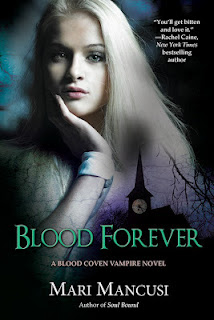 Sunny and Rayne McDonald have had their lives turned upside down thanks to the Blood Coven. But when the past itself is changed, the sisters will do anything to get back what they’ve lost…

After making a deal with the devil, Rayne and her twin sister, Sunny, have been given the chance to go back in time—to prevent that fateful night when Sunny was bitten by Magnus from ever happening. But while Sunny has been offered a vampire-free existence, she finds she doesn’t want to live without Magnus by her side. And although Rayne puts up a stoic front, she secretly wishes that the vampire Jareth was back in her arms.

To reclaim their lives, Sunny and Rayne team up to figure out a way to change history for the better. Problem is, Jareth and Magnus aren’t all that eager to help two unfamiliar girls who somehow know everything about their vampiric organization. Now, if the twins can’t get the boys on their side, history may spiral out of control—destroying not only the Blood Coven, but quite possibly the entire
race...
Mari would like to giveaway a book!
Readers choice! Either her newest release Blood Forever or The Blood Coven Vampires Volume 1!
This is International!
All giveaways this month end October 7th!
a Rafflecopter giveaway
Posted by Cynthia Garcia at 5:45 AM