Today I have the great honor of interviewing the wonderful Brigid Kemmerer, author of the Elemental series.

Brigid Kemmerer was born in Omaha, Nebraska, though her parents quickly moved her all over the United States, from the desert in Albuquerque, New Mexico, to the lakeside in Cleveland, Ohio, and several stops in between, eventually settling near Annapolis, Maryland. Brigid started writing in high school, and her first real “novel” was about four vampire brothers causing a ruckus in the suburbs. Those four brothers are the same boys living in the pages of The Elemental Series, so Brigid likes to say she’s had four teenage boys taking up space in her head for the last seventeen years. (Though sometimes that just makes her sound nuts.)

Brigid writes anywhere she can find a place to sit down (and she’s embarrassed to say a great many pages of The Elemental Series were written while sitting on the floor in the basement of a hotel while she was attending a writers’ conference). Most writers enjoy peace and quiet while writing, but Brigid prefers pandemonium. A good thing, considering she has three boys in the house, ranging in age from an infant to a teenager.

While writing STORM, it’s ironic to note that Brigid’s personal life was plagued by water problems: her basement flooded three times, her roof leaked, her kitchen faucet broke, causing the cabinet underneath to be destroyed by water, the wall in her son’s room had to be torn down because water had crept into the wall, and her bedroom wall recently developed a minor leak. Considering SPARK, book 2 in the series, is about the brother who controls fire, Brigid is currently making sure all the smoke detectors in her house have batteries.

When did you first begin your writing career?

I first began writing seriously in high school. My friends and I would write longhand on notebook paper, then trade pages back and forth to read and comment in the margins. I still have three or four loose-leaf notebooks full of those old stories. It doesn’t seem like we were writing all the time, but we must have been, because I distinctly remember pulling out my story binder in Calculus during senior year, just to get some extra paper, and the teacher said, “No. No more writing stories in my class. This is math.” (And I loved math!)

What sparked your first idea for The Elemental Series?

The first novel I wrote in high school was about four vampire brothers, named Michael, Nicholas, Gabriel, and Christopher. It was a silly story, but I still have most of it on paper. In my twenties, when I really began to take writing seriously, I wrote a few books but was unable to find a literary agent or a publisher. I couldn’t get those four brothers out of my head – but I didn’t want to do vampires again. I started tossing around ideas that would work with the number four. Four horsemen of the apocalypse. Four leaf clovers. Four, four, four. The four elements of earth, air, fire, and water seemed to work best—and I had a lot of ideas how I could make it fun. What teenagers wouldn’t want to be able to control the elements?

Were there any other books or authors that helped or guided you as you began writing your first book, Storm?

I rarely read writing books. I do have a small group of critique partners who are yet-unpublished who are a fantastic support system. The best writing resource for me was the Anne Arundel County High School Handbook, believe it or not. It’s like a laundry list of things kids can get in trouble for. And trouble in books makes for compelling reading.

Are there any people in your life that helped you through out your writing?

My mother has always supported me. I can’t thank her enough. She used to tell me to send my stories to Hollywood. (She still does.) My husband, too, is incredibly supportive. I had to write 50 pages this weekend, and he made that possible. He also makes for a great sounding board. I can always ask him if something sounds lame.

Do you have a specific writing routine that you follow?

I turn on the coffee pot. That’s about it. Oh, I plug in my headphones and fire up iTunes, too. I can’t write without music.

Unfortunately, I can’t tell you my favorite part of the book without ruining it for you! The book talks a lot about bullying, and harassment, and learning to stand up for yourself, even if you’ve made bad choices in the past. My favorite parts in other books are always when the underdog finally wins, and in my book, that’s no different.

What was the most difficult issue you encountered in writing the book?

Writing from the point of view of a teenage boy. (But I think I pulled it off.)

If you could summarize your thoughts on Storm in a couple sentences, how would you describe it?

Storm follows Chris, who, at 16, is the youngest Merrick brother. When he meets Becca, she’s saving him from getting beaten up in the school parking lot. Chris’s life is full of action and adventure and paranormal excitement—but at its root, it’s a story about family, and brotherhood, and standing up for yourself.

If you could do the same with your upcoming second installment in the series, Spark, how would you describe it?

Spark follows another of the Merrick brothers, Gabriel. His element is fire—and when an arsonist starts burning down houses in his town, his brothers think he’s involved. Gabriel then gets caught cheating in school, and it sends his life into a tailspin. Luckily he meets a girl who helps to pull him out of it… 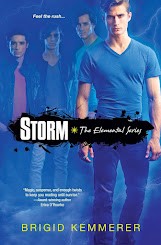 Becca Chandler is suddenly getting all the guys-- the ones she doesn't want. Ever since her ex-boyfriend spread those lies about her.

Then she saves Chris Merrick from a beating in the school parking lot. Chris is different. Way different: he can control water--just like his brothers can control fire, wind, and earth. They're powerful. Dangerous. Marked for death.

And now that she knows the truth, so is Becca.

Secrets are hard to keep when your life's at stake. When Hunter, the mysterious new kid around school, turns up with a talent for being in the wrong place at the right time, Becca thinks she can trust him. But then Hunter goes head-to-head with Chris, and Becca wonders who's hiding the most dangerous truth of all.

Thank Brigid so much for coming by!

Brigid would like to give 2 people Elemental swag!
This is International!
All giveaways this month end October 7th.

a Rafflecopter giveaway
Posted by Cynthia Garcia at 2:25 AM