Today I am happy to introduce you to Jennifer Bosworth, author of Struck!

Jennifer Bosworth lives in Los Angeles, California, where lightning hardly ever strikes, but when it does she takes cover. She is the writer half of a writer/director team with her husband, Ryan Bosworth. Learn more about her at http://www.jenniferbosworth.com.

Jennifer is teaching a class on crafting YA heroines in September.For more information on the class please visit:

She is here with us to talk about why we need kickass heroine. 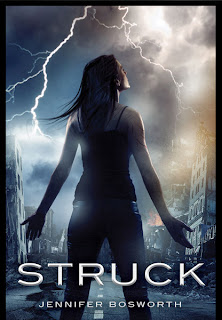 Mia Price is a lightning addict. She’s survived countless strikes, but her craving to connect to the energy in storms endangers her life and the lives of those around her.

Los Angeles, where lightning rarely strikes, is one of the few places Mia feels safe from her addiction. But when an earthquake devastates the city, her haven is transformed into a minefield of chaos and danger. The beaches become massive tent cities. Downtown is a crumbling wasteland, where a traveling party moves to a different empty building each night, the revelers drawn to the destruction by a force they cannot deny. Two warring cults rise to power, and both see Mia as the key to their opposing doomsday prophecies. They believe she has a connection to the freak electrical storm that caused the quake, and to the far more devastating storm that is yet to come.

Mia wants to trust the enigmatic and alluring Jeremy when he promises to protect her, but she fears he isn’t who he claims to be. In the end, the passion and power that brought them together could be their downfall. When the final disaster strikes, Mia must risk unleashing the full horror of her strength to save the people she loves, or lose everything.

Thank you so much Jennifer for stopping by today!!

To celebrate Jennifer would like to give one person Struck swag!
This is International!
All giveaways this month end on October 7th.

a Rafflecopter giveaway
Posted by Cynthia Garcia at 1:31 AM