Please welcome Ellie James, author of the A Midnight Dragonfly series to the page! 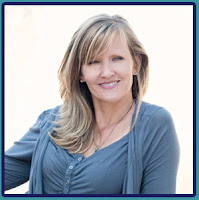 Most people who know Ellie think she’s your nice, ordinary average wife and mom of two little kids. They see someone who does all that ordinary stuff, like grocery shopping, walking the dogs, going to baseball games, and somehow always forgetting to get the house cleaned and laundry done.
What they don't know is that more often than, this LSU J-School alum is somewhere far, far away, in an extraordinary world, deeply embroiled in solving a riddle or puzzle or crime, testing the limits of possibility, exploring the unexplained, and holding her breath while two people fall in love.
Those who DO know have learned to go easy on her. They know what her blank stare means, and they know when she politely nods, she hasn’t heard a word. She even has a few special neighbors who’ve learned to call with gentle reminders about things like the first day of school and block parties!
All that aside, regardless of which world Ellie’s in, she loves rain and wind and thunder and lightning; the first warm kiss of spring and the first cool whisper of fall; family, friends, and animals; dreams and happy endings; Lost and Fringe; Arcade Fire and Dave Matthews, and last but not least…warm gooey chocolate chip cookies.


Wow! Thank you so much Ellie for stopping by and sharing that with us!!!

Sixteen-year-old Trinity Monsour wants nothing more than to live a normal life. But that isn’t as easy as it seems. Trinity is different. She is special. She sees visions, and for those she’s seen, it’s already too late.
Trinity arrives on her aunt’s doorstep in New Orleans with virtually no knowledge of her mysterious heritage. She begins settling into life at a new school and even starts making friends. But all too quickly her dreams accelerate; twisted, terrifying visions of a girl locked in a dark room. And when the head cheerleader, Jessica, goes missing, Trinity knows she has no choice but to step forward with what she’s seen. But people believe that Trinity has information about Jessica’s disappearance not because of a dream, but because she is involved. She is kind-of dating Jessica’s ex-boyfriend, Chase, and Jessica did pull a nasty prank on Trinity. Revenge seems like the likeliest scenario.
Nothing prepares Trinity for the dark odyssey that ensues while searching for Jessica, including the surprising romance she finds with Chase, or the shocking truths she learns, not just about the girl who has gone missing, but the past that has been hidden from her.

Teenage mystic Rachelle Dugas knows to expect the unexpected when she fills in for a friend leading a Haunted New Orleans tour. But when she decides to check out a haunted house on her own, nothing prepares her for the secrets lurking in the shadows—or the twist of destiny about to unfold.

It’s Mardi Gras, but for 16 year-old psychic Trinity Monsour this is no time for celebration. Another girl is missing. Haunted by visions she doesn’t understand—of an empty street lined by crumbling old buildings, a terrified voice warning her to be careful, and a body lying motionless in the grass--Trinity embarks upon a dark odyssey she could never have imagined. She'll stop at nothing to better understand her abilities, convinced that doing so is the only way she can make sure the terrifying images she sees never actually happen.
But it seems everyone wants to stop her. Her aunt is worried Trinity might discover secrets best left in the past. Her best friend, Victoria, is afraid Trinity is slipping away, her boyfriend, Chase, fears she’s taking too many chances, and the lead detective will barely let her out of his sight. Only one person stands by her side, and in doing so, he slips deeper and deeper into her heart--and her dreams--blurring the lines of reality and illusion.
When the dust settles, one of them will be dead.


Ellie would like to give 1 lucky person a copy of  Shattered Dreams and Broken Illusion!
This is US only. If you are International and have an address you can use please enter.
All giveaways this month end on October 7th.


a Rafflecopter giveaway
Posted by Cynthia Garcia at 1:18 PM