Once by Anna Carey Review and Giveaway 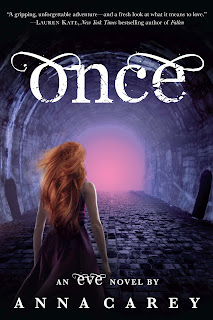 When you're being hunted, who can you trust?

For the first time since she escaped from her school many months ago, Eve can sleep soundly. She's living in Califia, a haven for women, protected from the terrifying fate that awaits orphaned girls in The New America.

But her safety came at a price: She was forced to abandon Caleb, the boy she loves, wounded and alone at the city gates. When Eve gets word that Caleb is in trouble, she sets out into the wild again to rescue him, only to be captured and brought to the City of Sand, the capital of The New America.

Trapped inside the City walls, Eve uncovers a shocking secret about her past--and is forced to confront the harsh reality of her future. When she discovers Caleb is alive, Eve attempts to flee her prison so they can be together--but the consequences could be deadly. She must make a desperate choice to save the ones she loves . . . or risk losing Caleb forever.

In this breathless sequel to "Eve," Anna Carey returns to her tale of romance, adventure, and sacrifice in a world that is both wonderfully strange and chillingly familiar.

When I finished Eve I was so happy that I already had Once. I had to continue on with the storyline. The way Eve ended it made me want more.

I enjoyed Once a lot more than Eve. Yes, I know odd. Normally the first book in the series is the best one but even though it's just one book you can totally tell how Anna's writing has grown.

Eve's personality is more mature and she grew a back bone which I love. The storyline offers a few twist, turns, and surprises that keep you reading. The cliffhanger is one of the biggest one's I have read. Seriously, how Anna expects me to wait till next year for the next book I have no idea. I wanted to cry, yell, and throw the book.

I really do recommend this series to everyone

Below is a list of Once's Playlist. Read through it. Anna gives a brief reason for each song why it was chosen. After reading it fill out the Rafflecopter. There is ONE mandatory entry and that is to comment telling us your all time favorite song and why. After you do that there will be extra entries you can do. Sorry guys but the prize is coming from the publisher so it's US only. If you are international and have a friend in the US and you can use their address feel free to enter.

What's the prize you ask? Are you ready for this? Okay... ONE person will win a copy of EVE and ONCE AAAAAANNNNNND a $10 Itunes Gift Certificate. Awesome right! Giveaway ends Tuesday July 10th. Now get to entering!!! 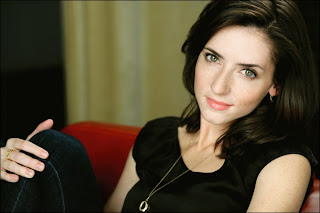 The Eve Trilogy
Once Playlist

Bon Iver, Skinny Love
The novel opens with Eve living in Califia. She’s spent months thinking about what happened to Caleb, wondering if he’s alive and where. This song reminds me of that churning, torturous place she’s in—wanting to be with him, but hating the pain of the situation.

Ani DiFranco, Swan Dive
There’s a moment in the beginning of Once when Eve sets out to find Caleb. This song perfectly captures the risks inherent in loving someone. Eve knows it’s dangerous, but cares about him more than she does herself.

Jose Gonzalez, Crosses
The imagery in this song reminds me of the first night Eve goes to meet Caleb in the City, how the streets are dark, how there are shadows in the windows above. His is the reassuring voice that sees her through.

Ryan Adams, So Alive
This song is all energy. There’s a scene in Once that takes place under a bridge, and I could nearly hear this song playing as I wrote it. It speaks to how exhilarating it is to be in love.

Passion Pit, Sleepyhead Acoustic version
Sleepyhead was originally one of my favorite dance songs, but when I heard the acoustic version it nearly made me cry. Slowed down it’s so tender and intimate, and the lyrics capture this simple, private moment between two people.

Iron & Wine, The Trapeze Singer
Eve makes several painful decisions throughout the course of the story. In one, she says good-bye to Caleb indefinitely. This song is one of the most painful and beautiful love songs I know.  “Please, remember me” is repeated eight times.

Sia, Breathe Me
There’s a scene at the end of Once where Eve is in intense pain, and can’t fully comprehend what just happened to her. This song articulates that confusion and loss.

Florence and the Machine, Seven Devils
This song builds to a slow, simmering rage, and reminds me of the last chapter in Once. I can’t say more than that for fear of giving too much away…

a Rafflecopter giveaway
Posted by Cynthia Garcia at 2:40 AM