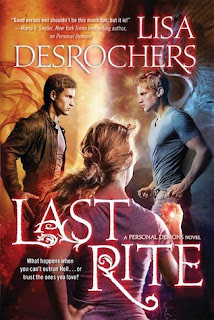 In this final installment of the thrilling, edgy Personal Demons series, the battle between Heaven and Hell has become critical, and Frannie Cavanaugh is right at the center of it.
With the help of the powerful angel Gabe and demon-turned-mortal Luc, Frannie has been able to stay one step ahead of the forces of Hell. But when the demons killed Frannie's best friend and destroyed her brother, they raised the stakes. If Frannie wants to keep her family and friends safe, she knows she has no choice but to go on the run.
Their best defense is the power Frannie has been struggling to master, but her attempts to hone her skill go horribly awry. If Frannie doesn't learn fast, the consequences could be devastating—even apocalyptic.

I first became infatuated with this series within the first chapter of Personal Demons, then I fell in love while reading Original Sin, now comes Last Rite the final book in the series and I am obsessed. Last Rite was a great ending to a very heart stopping, edge of your seat series. There were parts of the book to where it felt like I was holding my breath for pages on end. Last Rite made me laugh, get teary eyed, mad and yell at the book, and extremely happy.

I have always been a fan of Luc... I am always drawn to the bad boy persona. But in this book I think I became more closer to Gabe then any other book. I was truely cheering for him especailly when I new character was introduced. You have to read to see what happens.

A lot comes out, not just stuff about Frannie but also about her whole family. Things you would have never seen coming. But at the same time it blends perfectly with the storyline. I love Lisa's invision of God. It was genuis! The climax of the whole series was gripping and not what I expected to happen. Another thing I loved was that Frannie was able to get closure with a tramatic situation.

I was a little confused on one thing and maybe in the future I can get it clairified. But don't fret the small part I was confused about does not hurt the storyline in any way.

Lisa has a way with words that sucks you in. I huge thumbs up to her. I can't wait to see what else she has to offer. The Personal Demons series is my number 3 all time favorite YA series. Even though Last Rite was the final book in the series I still want more.

One last thing, the sign that is hung up in Hell at the end of the book was brilliant!!