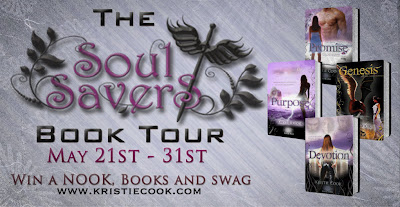 I am a big fan of the Soul Savers Series by Kristie Cook so I was delighted when I was asked to join this tour. Then I became very excited when I was told that I could ask one question to my favorite character Owen.

Cynthia: What is the biggest betrayal that has happened to your family?

Owen: *shrugs* As far as I know, I have nothing juicy to tell you. I guess we’re lucky like that. But with this traitor among the Amadis now…well, we take that personally. Any betrayal of the Amadis is a betrayal of my family. We will own this traitor!

*Sighing and fanning myself* Oh! Um....did you guys catch that answer? *wiping the drool from my chin* Hopefully Kristie won't mind if I keep Owen here in California for a few days...or weeks.

But back to the tour. We are celebrating Devotion, the 3rd book in the series, which was released in February. 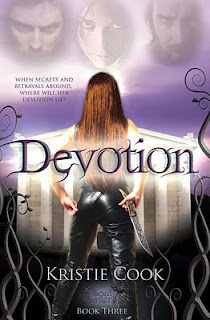 With powerful abilities gained from the Ang’dora and Tristan back by her side, Alexis thinks she’s ready for the next challenge— protecting her son from what appears to be the inevitable. But she has so much to learn about her powers, her new world and the people in it. Nothing is what it seems to be on the surface, including the Amadis.

Power-hungry politicians comprise the council and make impossible demands. A traitor lurks among them all, inciting trouble that could destroy the Amadis and, ultimately, humanity. The Daemoni wreak havoc in the human world, with the ultimatum that they’ll continue attacking innocents until Alexis and Tristan are expelled from the Amadis’ protection. The couple’s own society begins to shut them out. But that’s not all.

Someone’s keeping a secret. A big one. Faith and hope in Alexis and Tristan will be restored if she can uncover the truth in time.

But the search for answers leads only to the discovery of more betrayals by those closest to Alexis. Her devotion is put to the test—devotion to her husband, to her family, to her people and to her beliefs—leaving her to question whom she’s fighting for and why she should even bother. But if she won’t fight . . . who will?

Devotion, the latest book in the Soul Savers series.
Add Devotion to your Goodreads TBR

You can check out my reviews for the whole series here:
Genesis
Promise
Purpose
Devotion

Now a little about Kristie herself: 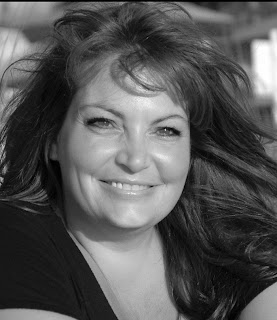 Kristie Cook is a lifelong writer in various genres, from marketing communications to fantasy fiction. Besides writing, she enjoys reading, cooking, traveling and riding on the back of a motorcycle. She has lived in ten states, but currently calls Southwest Florida home with her husband, three teenage sons, a beagle and a puggle. She can be found at www.KristieCook.com.

And FINALLY the giveaways...you heard me right that was plural. While you guys read it over I am going to stare some more at my...I mean our, lovely Owen.

Nook Simple Touch (US only)

International Prize — All 4 books as ebooks
Leave a comment on this tour post to be entered to win.
Each comment left throughout the tour will count as an entry.
Please include your email address and if you are international.

To find out where all the other stops are go here:
http://www.kristiecook.com/2012/05/on-tour-and-you-could-win-nook.html
Blog Giveaway:

1 person will win an ebook of Devotion.

Just comment telling us what is the biggest betrayal that has happened to your family. The winner will be randomly chosen on the June 4th.

*Grabbing Owen by his shirt and quickly leaving the room before Kristie catches us* Now get to commenting!!

Posted by Cynthia Garcia at 4:05 AM 11 comments