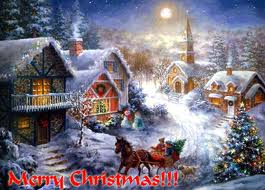 Today we have Felicia Rogers, author of There Your Heart Will Be Also, talking to us about Christmas traditions. 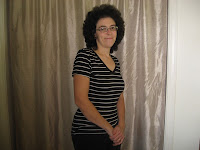 Christmas Traditions
When I think of traditions, I think of an event that occurs on a regular basis.  Everyone, every family, designates their own traditions, either on purpose or by accident.  It just happens.  One year you pick what you want to do, you have a good time, so you do it again.  And no time is more filled with traditions than Christmas.
Christmas, which means Cristes Maesse, or the Mass of Christ, is celebrated by lots of individuals around the world.  For those who celebrate the holiday a natural set of traditions develop.
A long time ago, I remember my grandmother telling me a Christmas memory.  It involved what she received for Christmas.  In the southern United States in the 1930s and for more years to come, most children received a bag, or a poke, as it was commonly referred to in the South.  In this poke one would most commonly find an apple, an orange, a few walnuts, and perhaps a stick of candy.  In general this was your “gifts”.  I would hate to hear what a modern child would say if this same tradition was upheld today!
But I digress.  Traditions for this holiday differ based on your location.  I’ve heard an Australian acquaintance discuss throwing meat on the “barbie” for their holiday dinner.  Then I realized that for them their Christmas fell during the summer.
Where I live we generally have cold, snowy or wet weather.  We gather together for a large dinner, in some cases resembling Thanksgiving from only a month before.  We travel miles and miles to ensure that all family members are visited.  We have church meals and exchange gifts with different organizations.  Then of course we have our own Christmas, or gift exchange on Christmas morning.  In recent years before we open our presents, we’ve taken to reading the Birth story of Christ from the Bible.
All this begs me to ask the question, what are your family traditions?  What special things do you take part in during this season?
Website: www.feliciarogersauthor.webs.com
Email: feliciarogersauthor@yahoo.com
Facebook: www.facebook.com/feliciarogersauthor
Books:
There Your Heart Will be Also – Historical suspense
The Perfect Rose – Contemporary Romance
The Key – YA paranormal suspense
Mara’s Secret – sequel to The Key
The Holiday Truce – Contemporary Romance
Soon to be released:
Love Octagon – Chick-Lit
The Painted Lady – Inspirational Suspense
Felicia is offering an E-copy of There Your Heart Will Be Also as a Christmas present to 1 special person. All you have to do is comment below  telling her your favorite Christmas tradition. To get another entry share the link to this post of Facebook and comment with the link where you shared it. This giveaway ends on the 17th. Good Luck! 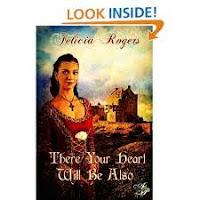 Only daughter of an English lord, Sarra of Greenbriar, is used to getting her way. So when her father passes and the King begins sending suitors, she feels justified in taking matters into her own hands. Through a series of harmless pranks, Sarra works to keep the potential husbands at bay.

Cedric MacNeil is a Scotsman that has lost it all. Death claimed his parents and jealousy claimed his entitled position as Laird of his clan. Since his mother was a familiar of the English court, he leaves his native land and heads to England to fight on behalf of the English King. Tournaments are won, earning honor and glory for the crown. Cedric’s reward is the opportunity to gain what he wants most in this life, land.

But as he gets to know Sarra, he realizes he might get more than he bargained for.
Posted by Cynthia Garcia at 12:55 PM