Today Shaun Allen, author of Sin has stopped by with a great guest post for you! 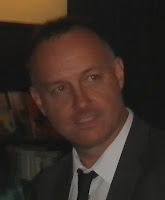 Hmmm.. A guest blog post.  Now what would I do that about?  Do I have enough of interest, other than in my stories, to tell?  Will my words hold you rapt, or wrapped in a cocoon of otherworldly wisdom?
Nah.
Thinking of a subject to write a guest blog post on was really quite difficult.  Is that a surprise from one who purports to be a writer?  One who declares himself a designer of authorian delights?  Authorian, rather than Arthurian...  Although sometimes it can be likened to pulling Excalibur from the stone...  Or teeth for that matter!
So what inspired me to write this particular piece?  Inspiration, in fact, did.  I was inspired to write a piece on Inspiration - 99% mental Insurrection and 99% Perspiration.  And 1% luck.
Yes that doesn't add up, but my main character kills people involuntarily and talks to his dead sister.  Or she talks to him and he listens, mainly because, it seems, you can't argue with a ghost.  They seem to have a higher knowledge - or they pretend to have anyway.  Even denying that higher knowledge still makes it seem they have them.  Plus, she's female.  Dead or alive, as a man, I understand his pain!  Either way, in worlds were the dead walk, dragons fly and ordinary kids ride a train to Wizarding school, who says 99+99+1 can't equal 100?
In fact, who says 100% is complete?  Why can't 199% be a whole?  Perhaps 199% is the Fahrenheit to 100%'s Centigrade.
So.  Inspiration.  Where does it come from?  Is it a lurking beast that hides in the shadows and you have to reach about blindly in the hope of catching hold and bringing it forth into the light?  Or is it a happy little elf, sitting upon your shoulder, chatting away into your ear.
For some it's one and for others, I'm sure, it's the other.
For me...  I don't know if it's either.  I think it's a joker, resplendent with juggling balls and tri-cornered hat, riding the back of the skulking beast until it wants to leap out and shout "BOO!", taking me by surprise but filling me will all host of tumbling words and ideas.
I very rarely plan out a story or piece of writing (which I'm sure you can tell from this!).  I have a name or a starter sentence and everything, normally, flows from there.  Sin, my novel, started from thinking of the word Sin as a name.  I had no idea where the story would take me until it did.  With his ongoing blog posts, it's the same thing.  I have a beginning and the middle and end follow where they will.
Today's, for example, is a 'diary entry' called Little Willy the Wire.  The blog is written from the point of view of Sin and is his diary from within his asylum - filling in the time prior to the book in which he escapes.  I hadn't planned on writing an entry today, preferring to work on a children's book I'm writing about a witch called Puddlebrain.
Then a small, wiry man called Willy came to my office door.  The next thing I know I'm writing about Little Willy the Wire who climbed up a church spire.  Yes, in rhyme.  Again, if that's the way it flows, then there's nothing I can do about it.  It's like a few weeks ago.  I settled down on my sofa, tablet computer in hand, to write some of Sin's sequel.
It started fine.  I don't know where the words came from, but, apparently, "It was snowing.  Heavily."
Almost a thousand words later I realised Sin was nowhere to be seen but Rudolph was on track to save Christmas!  Now, that's a book in itself.  I don't know where it came from, but the jester, joking to the last, had pulled his three peaked hat over my eyes and taken control of my hands.
He's a bugger like that!
Check out his book Sin!
Dead, dead, dead.  Say it enough times and it becomes just another four letter word.

What would you do? Could you kill a killer? Does the death of one appease the deaths of a hundred? What about that hundred against a thousand?

What if you had no choice?

Meet Sin. No, not that sort of sin, but Sin, crazy as a loon (you ask Sister Moon), and proud of it. Sin locks himself away in a mental home and, every so often, gets violent. That’s only so they’ll give him those nice drugs, though. The ones that help him forget.

It’s a pity they don’t work.

Sin, you see, has a serious problem. Well, it’s not so much his problem, as ours – yours, mine and everyone else’s. People die around him.  He doesn't like it and there's nothing he can do.  But someone else knows, and Sin has to stop them... and himself...
Flip and catch...