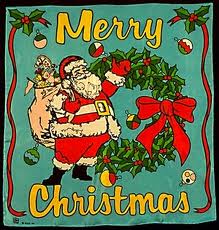 I am very happy to introduce you to D Michelle Gent, author of Deadlier... Than The Male and Cruel... And Unusual. Today she is going to tell us a little about herself so we can all get to know her better. 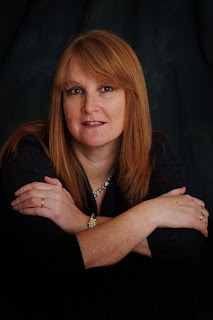 Now there are a few people who know me from various places – Facebook, Twitter etc but I would assume that more people will not have heard of me – D Michelle Gent – so I’ll try to correct that oversight.
I celebrated my 47th birthday two weeks ago and no, I certainly don’t feel that old. In fact, back when I met my husband, I would have said that 47 was way too old. I’m older than my parents were when I met him. I was 16 then, still at school and quite rebellious.
I’m no longer at school (obviously) and no longer quite rebellious... now, I am so much worse than that because I know where the boundaries are - I’ve tried them out.
I don’t like the word ‘no’ – especially when it’s being said to me.
I don’t like people who think I can’t or won’t or *gasp* shouldn’t – to them I say: “Watch me!”
I don’t like bullies or cruelty (especially to animals) and I really really don’t like liars.
I do like having fun. I like making people laugh and I really love writing.
I love writing so much that when I was told ‘no’ (that word, remember?) I carried on writing. My first book ‘Deadlier... than the Male’ took about two years to write and then I set about sending it off to agents, publishers and the like. The first one I tried sent me a lovely response which said it needed editing and slowing down but it was very moreish and they felt that it was going to be a good read. By the time I had got around to doing what they suggested, the company had gone (remember, I was a complete novice, I didn’t know what these people wanted from me or my MS). I treasure the letter though; it’s proof that someone from ‘the industry’ liked my work.
I wasn’t so fortunate on the next few times I tried. Sometimes the MS came back with the note ‘Not what we’re looking for’ – how would they know that if they hadn’t even read the first page?
A lot of the MS came back untouched (you can tell when the paper hasn’t even been rifled though, can’t you).
One person, high up in a well known company, advised me to split the book. I did everything she asked of me. I split the book, padded out both sides to around 100,000 words, edited both parts and sent it off.
It took six months for the reply to come back: ‘Not what we’re looking for’. And that was by email.
The next step we tried was the purchased review. Yes, I know that you should never, ever, ever, under any circumstances, pay for such a thing but I was a novice, remember and where was the harm?
I’ll tell you where the harm was. The person that reviewed my work took it upon themselves to be unnecessarily callous about me. I sent in a short biog and it was that that was critiqued, rather than my work. The person (anonymous of course) decided that he or she didn’t like *me* and seemed to set about tearing me apart rather than reviewing my writing.
I was devastated.
My husband was distraught. He thought it was his fault and that he’d ruined my own book for me.
I finally got my head around the fact that I should take all the personal nastiness out of the review and just take from it the constructive and helpful bits, but until I managed to do that, I couldn’t even look at Deadlier...
Now I have three books out in hardback, paperback and ebook and two just out on ebook and the real reviews - the ones by people who are readers and know what they like - are great, fabulous, wonderful and honest. That is all I have ever asked of anyone reviewing my books, to please be honest.
I have two books that I am reviewing for a very respected friend and I will never EVER slate anyone’s work the way mine was slated. I was given a piece of advice before I was published and that was:
If you’re asked for a review and you hate the book, tell the author in a constructive and respectful manner, personally and privately. If you love it, tell EVERYONE!
I know this blog is short and *ahem* sweet but the one piece of advice I would give to you is this:
Never take ‘no’ as the final and definitive answer. Somewhere, if you try hard enough, there’s always a ‘yes’.
There’s one other piece of advice I’ve always given my kids: When you work hard for your money, buy things that make you smile.
Books make me smile.
Thank you Michelle for coming by and sharing that with us. There are some really cruel people out there who don't know how to separate personal and professional from each other. I am really glad things have worked out for you.
If you haven't checked out D Michelle Gent's books yet I highly suggest you do so! Here are some links where you can find her:
www.gingernutbooks.co.uk
http://www.gingernutbooks.co.uk/sales.html
http://www.gingernutbooks.co.uk/dmichellegent.html
Twitter: @ShellGent
http://d-michelle-gent.blogspot.com/2010/07/here-we-go.html
http://deadlier-than-the-male.blogspot.com/2010/05/welcome.html
http://shellgent.hubpages.com/
http://www.facebook.com/DMichelleGentAuthor
http://www.facebook.com/GingernutBooks
http://www.amazon.co.uk/s/ref=nb_sb_noss?url=search-alias%3Daps&field-keywords=d+michelle+gent&x=16&y=19
http://www.amazon.com/s/ref=nb_sb_noss?url=search-alias%3Daps&field-keywords=d+michelle+gent&x=16&y=19

Werewolf - an unrestrained beast of anarchy or a cold and relentless, calculating killer? If you cannot answer this with absolute certainty, it's possibly because the werewolf you met is more evolved than man ever dreamed. Werewolves do exist and they exist alongside our society, they have their own rules and hierarchy, they hide in plain sight and have done for millennia. Sometimes, the female of the species is Deadlier... than the male. 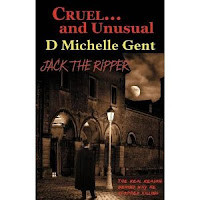 JACK THE RIPPER What really happened to him Victorian London and in a very short time, the inhabitants of the slums of Whitechapel will find that they have a bigger worry than the usual deprivation, disease and crime. There's a killer in town but not just any killer, he likes tearing his victims apart, feeling their terror as well as their entrails! Jack The Ripper is his adopted nickname and he certainly lives up to it! The part of the Wolf Society that inhabits these streets and the ones in close proximity to Whitechapel are also concerned. If the murderer is not captured shortly, he'll draw attention of the unwanted kind, the kind that may dig deeper than the Wolves would like - deeper than they can afford. If the Hume Police Force should find evidence of Werewolf activity, Wolves will find themselves the hunted once again. Chased from England's shores as they were once before. Chased or eradicated. Hazel must decide whether her Sentinels should find the murderer or allow the Police to find him - but if her suspicions are correct that he is a Throwback and the Police do find him first, then the Werewolf society will be hunted and eradicated anyway!
Posted by Cynthia Garcia at 11:58 PM