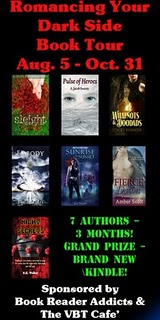 Woo Hoo! We are one of the stops today for the Romancing Your Dark Side book tour. Have you been following? It's bee a blast!
Today we have A. Jacob Sweeny, author of Pulse of Heros, with a guest post. I asked her how she came up with her characters and this is what she had to say. Hope you enjoy!


Pulse of Heroes has an ensemble of multi-dimensional characters and although they seem so very developed, this was not always the case and they weren’t all thought of in the beginning of my writing process.
The idea of the characters came as a two part process that was a few years apart. The idea of the immortal guys was what I had first. It came to me over six years ago, after I finished writing a historical screenplay. I spent more than a few years doing research for the screenplay itself, and once I was done I wanted to bring some of my findings into another readable and more accessible form.
At first I thought that I might write a historical fiction novel, but I wanted to cover so much more than what one lifetime can accomplish in a book. At the same time I didn’t want to be stuck writing book after book of generation after generation to bring all this interesting history that I researched to the front, as it spans thousands of years and numerous continents.
That’s when I came up with my heroes! They are the watchers, the witnesses of history, and of humanity. As witnesses they have lived many full lives and those lives and the knowledge they garnished from them has made them who they are. Although they had no names yet, I instantly knew exactly who Elliot would be, and had an inkling about the rest of them. Hence Haneul, Kahl , Rion, Devin, Ando, and Mikoto were born.
I put this idea away into the fold of my brains and continued on my own historical journey.

It was about 2 years ago, after I finished a Late bronze age/early Iron Age archaeological dig at a city port that the ideas of my heroes started to re-emerge.
Then I spent some time with my sixteen-year-old cousin, and we were talking about her school and also about the books she likes to read and other things, whether it was difficulties or just mundane everyday life stuff. That was when the spark happened and the idea of writing a coming of age romantic story became fused in with my hero ideas. That was when ‘Michelle,’ the main character of The Pulse trilogy, was born. She is very loosely based on cousin, a little bit of myself, and other female family members.
It’s all ‘history’ after that. And you can read about it in the book itself.

WOW! So what did you think? Leave a comment below telling us what you think about how she came up with her characters, if you have read her book, or why you want to. If you like you can also leave a question and when A. Jacob Sweeny has time she will stop by and answer.
There is also a giveaway! There are 2 prizes up for grabs today an E-book of Pulse of Heros and a Pulse of Heroes calendar poster. You will get an entry for each comment you leave. The winners will be announced tomorrow!

Michelle used to feel that she was behind in everything, especially schoolwork and relationships.
Her great aunt from the old country says that she is like a bland meal, “no salt or pepper”. But in junior year, everything changes. Her father takes a position on the Town Council, a popular boy in school becomes interested in her and, most importantly, the Hekademos Learning Center, a private school for ‘troubled’ students, moves into her neighborhood amidst the protests of the entire town.

After seeing the School Regent out with a group of young guys just before Christmas, Michelle is convinced that there is something odd about them. Her curiosity gets the better of her and she embarks upon a mission to figure out what is really going on. After an embarrassing fall over the school wall, Michelle meets Elliot and her ordinary ‘bland’ life changes its course forever.
Elliot is no ordinary human. In fact, no one at the Hekademos Learning Center is. Beautiful and fierce, they have survived throughout the millennia by weaving in and out of human events. Through them, Michelle learns that history and myths from around the world are dotted with references to their kind. Michelle falls madly in love with the ever-striking and mysterious Elliot and, as much as he tries to fight it, he develops strong feelings for her as well. Although Elliot carries numerous painful memories from his many pasts, he disregards his own better judgment and the advice of his friends, and finds himself falling for Michelle‘s offbeat personality. Their feelings grow in intensity, but when History catches up with them, the difference between their life paths threatens to destroy any future that they might have had together.
Michelle learns that there are infinite shades of gray between black and white, and has to deal with the bundle of contradictory emotions called love. After some unexpected twists during a family trip to Europe, she has to trust her intuition in order to face the danger and uncertainty of being drawn into Elliot’s wondrous world. Ultimately, it is up to Michelle to make the split-second, life-altering decision that will either tear them apart forever, or give them another chance.

Posted by Cynthia Garcia at 9:21 AM