Steph here! I discovered the book State of Emergency by Summer Lane by 'accident' and I have to admit it's one of the best mistake I made, this book was fantastic. Below we will have an interview, a giveaway and my review.... first let discover the author...

Who is Summer Lane? 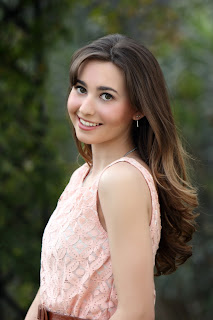 Summer Lane is the author of the YA/NA Romantic Thriller, State of Emergency. She is a freelance writer, publicist and lover of all things feline. Summer is also the author of Snappy Social Networking: How to Dominate the Blogosphere & Everything in Between. In her spare time, Summer is the creator of the online magazine/blog, Writing Belle, in addition to being a frequent contributor at NA Alley, a website dedicated to all things New Adult.


Summer began writing when she was 13 years old, due to the fact that the long afternoons after school were somewhat boring, and writing stories seemed to make the time pass a little quicker. Since then she has written many books about jungle cats, secret agents, princesses and spaceships. She is also a non-fiction writer, but her debut novel, State of Emergency, is her favorite book yet. You can find Summer hopping around on the Internet by following her on Twitter @SummerEllenLane. Want to talk to Summer? Email her at: summerlane101@gmail.com 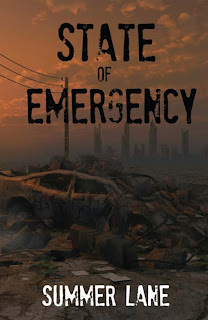 Cassidy Hart is your typical High School graduate: A little shy, a little sarcastic, and a little naive. But when an electromagnetic pulse takes down the United States, she's forced to kick into full survival mode when she gets separated from her father.
Yeah. Things suck.
But with the help of a handsome soldier named Chris, she just might find her dad without getting into serious trouble.
Emphasis on might.
Oh. And there's the matter of avoiding getting killed in a world that's quickly turned into an active war zone.
It's going to change Cassidy's life.
It's going to be a major pain in the butt.

Review:
If you follow my reviews you probably know how I enjoy Post-apocalyptic/dystopian novels. I read SO many of them making me extremely picky and hard to impress. Well all that to say that State of Emergency by Summer Lane managed to impress me! It was such a great book and I was very surprised to discover this book, it deserves much more recognition! It is one of the best I read so far and is easily making my top 8 in the category.
First the settings of this book reminds me a lot of the show Revolution which I love. It was so similar I checked to see if one could have been inspired by the other but no. I guess that both Summer and NBC got awesome ideas at the same time.
Cassidy is a great character and I truly enjoyed following her through this book. She is fierce, brave and somehow a little naïve even if she refuses to recognize it. She is learning so much thanks to Chris.
Now Chris, man that guy make you fall in love for page 1! Seriously, that guy is major crush alert. He is 6 foot something of hot hunky marine….He is brave, lethal but also soft and loving when he needs to be.
This story is enticing and I loved to follow the evolution of Cassidy as a person as well as her evolution of her relationship with Chris.
The storyline was very well done, it is scarily probable and Summer wrote perfectly how terrible events can bring both the best and the absolute worse out of people. The story unravel on a very steady pace and you never get bored while reading.
In conclusion: State of Emergency is a very strong beginning of a series and it a perfect and original post-apocalyptic story. It is full of action, losses, betrayal with an underlying romance. I will now be eagerly waiting for the Sequel State of Chaos.
Stars 4.5/5

Hi Summer.
First let me thank you for doing this interview, I loved State of Emergency and I can’t wait for the Sequel “State of Chaos”.

1-      Tell us a bit more about you...Did you always want to become an author? When did you start writing?
Well, I always wanted to be a storyteller. When I was growing up, I loved the concept of getting lost in a story world, but I never thought about being a writer. I did a lot of oral storytelling to entertain my baby brother over the years, and at some point I remember sitting down and literally taking a pen to paper and writing one of those stories down. A light bulb went off – this was fun, but more importantly, I recognized that I had a talent for it. I came to this realization when I was about 13.

2-      What is your favourite book?
I have so many! Growing up, my favorite book was Robinson Crusoe. I was fascinated with the idea of a survival story. As I got older, one of my top reads was Jane Eyre, and today my number one books are the ones that keep me on the edge of my seat; books like Divergent, by Veronica Roth, The Hunger Games by Suzanne Collins or Enclave by Ann Aguirre.

3-      I found the premise of the story very interesting, what inspired you?
I’ve always wondered what I would do if a huge emergency went down where I lived. How would I survive? I took that same concept that was always floating around in my brain and gave that problem to a naïve high school graduate named Cassidy Hart. Electromagnetic Pulses were something I’d always read about, and I thought it would be good alternative end-of-the-world story. I didn’t need zombies or aliens to pull it off.

4-      Cassidy is a very complex character, she is strong, trained and yet she still has this naivety coming with youth....Did you get inspired from someone you know?
Cassidy is complex! She has all the skills and information needed to keep herself alive, but because she’s never had any real world experience, she doesn’t know how to apply those skills. Cassidy is based on your average teenager. “A little shy, a little sarcastic, and a little naïve,” like the book says. I created her to be the friend that I’d want to have: loyal, honest, but somewhat innocent, which makes her refreshing. I got really tired of reading about heroines who swear, drink, have sex and try so hard to fit in with the tough guys. I just wanted a girl who was normal, you know?

5-      Your story is very dark, showing how an astronomical disaster can bring both the best and the worst in people in a short amount of time. This is something that Cassidy has a lot of problem accepting. Is it your case?
Because Cassidy is somewhat innocent in the beginning of State of Emergency, she doesn’t really anticipate the amount of violence coming her way. She expects people to be decent, but life or death situations make the population really desperate, really fast. I wrote the book with this in mind. It’s hard to accept the fact that sometimes, things get ugly, and the only thing you can do is dig in and try to survive.

6-      Chris is the perfect book crush, a lethal marine with a big heart....Tell us something about him that we don’t know.
Chris is based on two things: the Navy SEALs that train on Coronado Island at the Naval Station where my grandfather was once stationed, and my admiration for military men and law enforcement officers. I wanted a main character who was a man, and who wasn’t afraid to protect the person he loved. He needed to be capable to do that, so I have him the skillset he needed to take care of Cassidy and keep both of them alive in a post-apocalyptic environment.

7-      If you had only one word to describe Cassidy and Chris? What will these words be?
Cassidy: Sassy.
Chris: Logical.

8-      Did you picture an actual cast for the characters of State of Emergency?
I didn’t write the book with an actual acting cast in mind, except for one of the characters. Now I can look at my characters and be able to tell you who could play Chris and Cassidy. I’d like to see Chris Hemsworth or Chris Evans for him, and Jennifer Lawrence for Cassidy. I also think Frank Hart could be played by Bruce Willis, just because he always does such a good job portraying police officers in movies.

9-      Cassidy and Chris’s relationship starts rocky and evolves slowly. I really enjoyed the fact that it was not instant love. Is there any song that inspired you their relationship? If yes which one? For me I have to admit that ‘After the Storm’ by Mumford & Sons or ‘I’d Come For You’ by Nickelback.
I wanted their romance to be real. So a love-at-first-sight thing wasn’t what I was going for. I wanted them to learn to trust each other, then respect each other, and then fall in love. I wanted to base it in real feelings, not just instant attraction. I love listening to music, and I have to admit that Ed Sheeran’s Kiss Me is one of my favorites when I think of Chris and Cassidy.

10-   You went deep into the history behind the ‘blackout’, our own government turning against us; this is a scary perspective... Where did this idea come from?
Conspiracy theories are a novelist’s treasure trove! I like reading about what ifs, but I always wanted them to be based in reality. I wanted people to stop and think, Oh, my gosh. That could actually happen! So I combined those popular theories with solid facts and came up with something in between. I also looked back at major wars like World War II to see how national emergencies have been handled in the past. I wanted realism. So I did my research to get everything right.

11-   State of Chaos will be released soon, how many books are you planning for the series?
There will definitely be three books. That’s absolutely for certain. Beyond that, it’s possible that there could be four or five books. It depends on the longevity of the story and the characters. If there’s a story that needs to be told, I won’t hesitate in telling it!

12-   Is there any question you always wished to get ask but never was? What is it?
Indeed there is. I always ask writers what their favorite writing snack is, and what their advice is to aspiring authors. So I’ll answer both of them myself today. My snack: iced tea and chocolate chip cookies. No lie. I’m a real health maniac.
My advice: Never stop writing. Never stop working. You will want to quit at times, but trust me, once you give up it’s almost impossible to start again. Never, ever stop writing. Get self-disciplined and set your goals firmly in your mind. Tape them up on the wall. Repeat them out loud. Work towards them every day. Eventually, you’ll get to the place you want to be.

a Rafflecopter giveaway
Posted by steffy2106 at 9:13 PM