I was so excited when I was asked to be apart of this tour! Jacquelyn is my ALL TIME favorite author. So you can imagine when I signed onto this tour there was some squeeeeeeing lol. There was even more when I was told that she would do an interview.

But before we start with that let me introduce you to Jacquelyn for those who don't know her (Have you been hiding under a rock?): 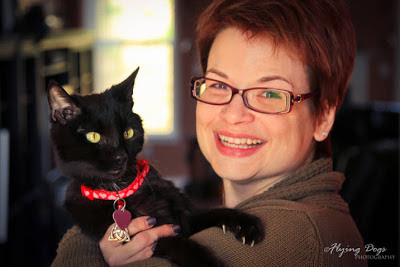 New York Times bestselling author Jacquelyn Frank is an old and decrepit 44 years old. She can’t remember shit, loves her eight cats to the point of lunacy, and lives in the mountains of Western North Carolina. She prides herself on being a crazy cat lady in the making (if not having already succeeded) and spends her free time rescuing teeny tiny kittens barely big enough to fill the inside of a toilet paper roll. You can watch for upcoming projects at www.jacquelynfrank.com or you can write to her at jackifrankwrites@gmail.com. If you’re writing her to complain about something, make sure you finish the book before you do ;) She loves to mess with your head.

You can also find Jacki on:

Now for the interview:

Cynthia: What is the most embarrassing thing that has happened to you while meeting a fan?

Jacki: I was suffering from a bad dose of the flu. I was vomiting the whole way to the signing…and then had a barf bucket under the table the whole time just in case. Does that count??

Cynthia: Yea I would say that counts. :(

Jacki: I have several who own the names of the characters. Damien and Nicodemous, both who are no longer with me. Jacob. Jake that is. Leo…who you will meet in this book.

Cynthia: I am also a huge cat lover... do you have a limit of how many cats you will take in?

Jacki: Umm. No. I have 41 at one time here this summer…ahhh kitten season!

Cynthia: What is the silliest thing that you have written in a rough draft and ended up editing out?

Jacki: Everyone getting super powers like the stinkin’ Power Rangers. Luckily my girlfriend talked me down from the ledge.

Cynthia: I am so glad she did lol. I couldn't imagine everyone with a power.

Cynthia: What is the weirdest dream you have ever had that gave you an idea of a storyline?

Jacki: Have you read Jacob? Or any of my books? They all come from weird dreams.

Cynthia: What is one thing you would like to tell your fans that you have never told them?

Jacki: I am secretly addicted to Downton Abbey. Le Sigh. Oh, and Grey’s Anatomy. I have seen EVERY SINGLE EPISODE. EVER. From day one.

Thank you so much Jacki for taking time to answer my questions! Also, Thank you for all of the wonderful stories you have brought us. Words can not describe my gratitude!!! 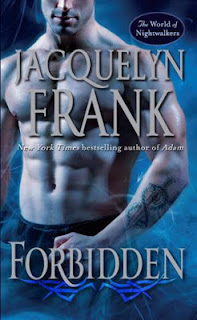 Forbidden
(The World of Nightwalkers #1)

From New York Times bestselling author Jacquelyn Frank comes this first book in The World of the Nightwalkers—an exciting and sensual new spin-off series in which the Bodywalkers, an ancient race of the night, battles the evil forces who prey on them.

The unexpected happens in an instant. On her way to work, secretary Docia Waverley hurtles into a crashing crossroads, and she quickly begins to suspect that things will never be the same. Then, when a tall, blond, muscular stranger intervenes on her behalf, telling her it is his duty to protect her at all cost, what is just a feeling turns to proof positive. That is, as long as Docia’s savior doesn’t turn out to be a crazed kidnapper.

When Ram finds Docia, he has no doubt that she is his queen. But as this golden warrior sweeps in to protect her, he feels something more than body heat every time they touch. He is overwhelmed by a searing connection that goes deep into the twin souls inside him. A desire rises in him that is forbidden—this woman is his queen, the mate of his king, his leader, his best friend. And yet Docia is so vulnerable and attractive that she awakens a hunger in Ram that is undeniable, a carnal craving he cannot yield to . . . not without risking the very survival of the Bodywalkers. 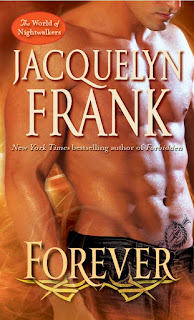 (The World of Nightwalkers #2)

After being brought back from death, police officer Jackson Waverly receives the shock of his life: he has become host to a Bodywalker, a spirit that is reborn in flesh and blood, and part of a proud, ancient race that uses its extraordinary gifts to battle dark, evil forces. Jackson’s spirit is a powerful one—none other than the Egyptian pharaoh Menes, who longs to reunite with his eternal love, the Egyptian queen Hatshepsut.

While Menes is obsessed with finding the perfect vessel for his queen, Jackson cannot stop thinking about Dr. Marissa Anderson, the gorgeous precinct shrink who keeps pushing him to confront his grief over the loss of his K-9 partner. But what Marissa really arouses most in Jackson is intense desire, which is exactly what Menes is looking for. To fight a great enemy, pharaoh and queen must join; but to host Hatshepsut, Marissa will first have to die. Fate has given Jackson a profound choice: save Marissa from Menes’ plan or keep an entire species from the brink of extinction.

*Fanning self* Hot damn those are some HOT covers!!

Now for a giveaway! Oh how I wish I could keep this for myself.
Jacquelyn would like to give 1 person a copy of Forbidden... did I mention it's signed! Oh, and International!!!

October 21 - Under The Covers -  http://underthecoversbookblog.blogspot.ca/

October 27 - Reading Between The Wines - http://readingbetweenthewinesbookclub.blogspot.com/

November 10 - Reading on the Wild Side - http://readingonthewildside.blogspot.com/
Posted by Cynthia Garcia at 12:57 PM