Today we have Cassie Alexander, author of Nightshifted her with us to share an excerpt of Moonshifted. 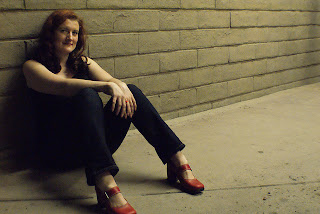 Cassie Alexander is an author and a registered nurse. Her debut trilogy, Nightshifted, will be published by St. Martin’s Press on May 22, 2012, and is already out in Germany.
She likes alchemy, blood, and science, in that order.
You can find her on Twitter, Facebook, LiveJournal, and Goodreads.
In 2012 Cassie will be attending Fogcon, Wiscon, Worldcon, and the Romance Writers of America annual conference. 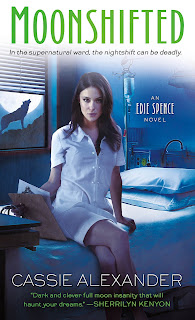 Excerpt from the middle of Moonshifted, by Cassie Alexander

Lucas put his hand out. "I didn't mean to frighten you. You're safe here. I swear."
I squinted at him. "Are were promises like vampire promises?"
He gave me a roguish smile. "Depends on the were." His phone rang this time. He looked at who was calling, and hung up. "Sorry. Jorgen again. I have to leave it on for when the cleaner calls. But I don't want to hear it from Jorgen."
I imagined Jorgen back at that were-bar, discovering Lucas's absence and frothing at the mouth. "I don't get why you have to fight so much."
"To prove my ability to lead. Miss me on one night? Catch me on the next. It's not a match really, it's a performance. Like I'm a magician and my wolf's the rabbit. How many times can I pull it out of the hat?" Lucas turned his phone's screen off. "It's a miracle Winter lived to see his amazingly old age, with them doing this to him."
I leaned forward, fascinated. "What's it cost you to change?"
"Pride? No, not really. I'm sure one of those vets you work with told you." He looked at me, and I waited quietly for his answer. "Each time you change it eats minutes off your life. It's like tapping into the bottom of the hourglass God gave you, draining out the grains of sand."
I hadn't thought of it like that, when Gina first explained it. It made everything seem more horrific. "Is it worth it?"
"One the nights when it's not for show, when you're outside as you were meant to be, yes. I can't imagine how frightening it was for little Fenris at the hospital, without a pack, being out of place. But in the land where you belong, it's perfect. You can feel it's what you were meant to do, to be. Through the pads on all your paws." He jerked his chin at me. "What'd it cost you to be a nurse?"
"My sanity. Three years of school. A lot of student loans."
"Not literally. The parts when you're in it, when you're there."
"Heh." I stared down at the end of my coffee. "Most nights there's a lot of people being unhappy with you. They've heard news they don't want to hear, and you can't change that for them. You spend a lot of nights pushing dying people like boulders up very steep hills."
"What's it like when it works, when you feel it?"
I thought about it. "Those parts don't happen as often as I might like." The most recent one involved his uncle, on the pavement, but I didn't think I would tell him that. Because sometimes you could do everything right, too, and it still not turn out well. "When you see something that needs doing, and you know you're the right one to do it, even if you're scared -- it's good. There's a lot of charting around those times though. And sometimes being yelled at by drunks."
Lucas snorted. "My dad was a drunk."
"Really?"
"Yeah. I never was sure which came first, the alcohol, or the asshole. He did this to me." Lucas stroked a finger along the dent on his nose. "Said if I changed into a wolf to heal it, he'd rip off my arm and beat me with it. I believed him."
"How old were you?"
"Fifteen. He always preferred to fight me as a human. He said the wolf would know how to fight when the time came -- it was the human half that needed training," Lucas said, his voice an imitation of his father's. "It took me years before I realized he did it so he'd bigger than me for most of my life."
"That's awful."
"Yeah, it was. I spent a lot of time in JV after that. He always waited until the day of the full moon to spring me. Thought he was punishing me. Little did he know, I preferred staying in jail."
"Lucas --" I set my coffee mug down on the ground, and drew an equation in the air between us. "You've had a rough life, you don't have an education, you're not from here. And you're going to lead the Deepest Snow wolfpack why again, exactly?"
"I'm of age, and I'm the closest related male blood. It’s how our system works." He shrugged. "I'm only holding the spot until Fenris Junior comes of age. Believe me, I don't want it."
"I just don't see why you're more competent than, say, Jorgen."
"He's bitten. He doesn't know what being a wolf is like. He's still chained by what made him a man."
"Then why don't you give them shots to cure him and the others, then? Or do they really all opt in?"
Lucas gawked at me, then laughed. "I'm just imagining you interrogating my uncle. Jorgen would tell you his service to my family is an honor -- he was bitten by the old man himself. And as for opting in -- the world is full of paths, Edie." He leaned forward, even with me, and his voice went rough, other-worldly, like the wolf was pushing through. "Sometimes you take one, and it gets you lost in the woods."
I sat very still, and for a moment felt like a rabbit must feel, when a hawk's shadow crosses above. Then Lucas laughed and shook his head. "I'm teasing, of course."
"Of course," I readily agreed. I held my mug out. "More coffee, please?"

And look it! The cover for the 3rd book!! I love these covers! 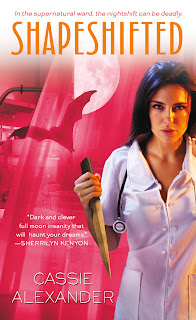 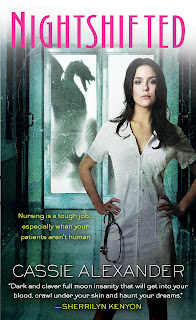 Welcome to the secret wing of County Hospital—where vampires get transfusions, werewolves have silver allergies, and one nurse is in way over her head…
Nursing school prepared Edie Spence for a lot of things. Burn victims? No problem. Severed limbs? Piece of cake. Vampires? No way in hell. But as the newest nurse on Y4, the secret ward hidden in the bowels of County Hospital, Edie has her hands full with every paranormal patient you can imagine—from vamps and were-things to zombies and beyond…
NIGHTSHIFTED
Edie’s just trying to learn the ropes so she can get through her latest shift unscathed.  But when a vampire servant turns to dust under her watch, all hell breaks loose. Now she’s haunted by the man’s dying words—Save Anna—and before she knows it, she’s on a mission to rescue some poor girl from the undead. Which involves crashing a vampire den, falling for a zombie, and fighting for her soul.
Grey’s Anatomy was never like this…

Thank you Cassie for stopping by today and sharing with us! I can't wait to read Moonshifted!

Cassie would like to give 1 person a copy of Nightshifted.
This is International.
All giveaways this month end on October 7th.

a Rafflecopter giveaway
Posted by Cynthia Garcia at 3:37 AM