I am so excited to have this next author here! I had the GREAT pleasure of meeting here at RWA and she is one laid back chick! Oh; and she writes an awesome series. The Charley Davidson series! 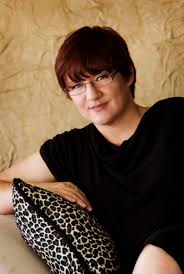 For reasons known only to the Big Guy upstairs, NYTimes and USA Today Best Selling author Darynda Jones won the 2009 Golden Heart® for Best Paranormal Romance with her manuscript FIRST GRAVE ON THE RIGHT. But even before that, she couldn’t remember a time she wasn’t putting pen to paper. When she was five, she would pick up a pencil and notepad, scribble utter chaos onto the page and ask her mom to read her masterpiece aloud. Thankfully, her mother would play along.  Later, she wrote plays for the neighborhood kids, made up stories for her brother as he played cars, and fell in love with Captain Kirk. Those raging, seven-year-old hormones only fueled her imagination, prompting her to create fantastical stories for Barbie and Ken to enact with plots that were horridly inappropriate to repeat in polite company.
After years of being repeatedly sent to the principal’s office for daydreaming during class, she managed to make it to high school where she almost finished her first manuscript. Sitting with her BFF in a corner booth at the local Tastee Freeze for hours at a time, she wrote a post-apocalyptic story about a group of teens who bore a remarkable resemblance to the members of Van Halen and were trying to escape the tunnels of a huge government fallout facility decades after World War III had destroyed the surface of the earth. It was a science fiction version of The Warriors and destined to be a classic.
Life was good. Writing was good. Then she graduated and the real world came crashing through. She forced the dream aside in favor of sustenance and shelter, got married to a local rock star, and had at least two kids that she can think of, the oldest of which was born Deaf, probably to spite her. When he was five, she packed up her boys and moved to Albuquerque to put him in a Deaf and Hard-of-Hearing program. The rock star stayed behind with the business, and they took turns going back and forth on the weekends to see each other for seven really long years.

While in Albuquerque, Darynda decided to see the cup half full and go back while she still had enough brain cells to make it worth her while. After graduating Summa cum Laude from the University of New Mexico with in Sign Language Interpreting, she moved back to her hometown and got a real job. Several in fact, mostly teaching at a local college and interpreting pretty much everywhere. Based on personal experience, she does not recommend having more than three jobs at any given time.
But bit by bit, the desire to write needled it’s way back to the surface. Unable to squelch it any longer, she started writing seriously again in 2002 with one goal in mind: A . Unfortunately, she sucked. Thank goodness practice makes perfect and three complete manuscripts later, she won that Golden Heart, landed an amazing agent and sold to St. Martin’s Press in a three-book deal.
Book one in the Charley Davidson series, FIRST GRAVE ON THE RIGHT, was a hardcover release in February 2011 with book two, SECOND GRAVE ON THE LEFT, coming out in August 2011 and book three, THIRD GRAVE DEAD AHEAD, in February 2012. She hopes you enjoy reading the series as much as she has writing it.
Darynda lives in the Land of Enchantment, also known as New Mexico, with her husband of more than 25 years and two beautiful sons, the Mighty, Mighty Jones Boys.

Take it away Darynda!

Thank you so much for having me!

One of my favorite things about writing—or I should say about being a published writer—is interacting with readers from all over the world. I love getting their stories about how this scene touched them or how that scene made them laugh out loud. But what I didn’t count on were the stories from people that left me sobbing uncontrollably into my coffee cup.

I had one from a reader whose sister, aka her best friend, died unexpectedly. She was devastated. She sank into a depression for months and only started to come out of it when she read my first book. She felt like I understood what she was going through. Can you say tear jerker? I had another from a woman who was so close to committing suicide, she knew exactly how and when she was going to do it. In the interim, she picked up my book and was so deeply touched that she decided to give life another chance.

And here I thought I was just writing to entertain.

I’ve had at least a dozen more, all along similar lines. They are so profound and so deeply moving, I have never felt so valuable in my life. And I’ve talked to other writers. Apparently, we all get notes like this at some point in our careers. Our stories touch lives. They change attitudes and educate, no matter how much we only wanted to entertain. It’s a huge responsibility, and one we writers do not take lightly.

I am so grateful for every reader, for every letter, and I’d like to take this opportunity to thank YOU! The stalwart reader. The career woman who has to get up early for work but stays up late to read one more chapter. The student who has a midterm and promises to study as soon as she finishes the book. The mommy who lives for naptime to get in one more scene before dinner.

So, what about you? Admittedly, I cry at commercials. I’m a wuss. But I would love to hear your stories! Was there ever a time when a book touched you so deeply, you feel like it changed your life? Your entire outlook? Your toleration and/or acceptance of someone who was different from you? Let’s hear ‘em, baby!
Thank you so much Darynda for stopping by! I just got done reading a book called Taking Chances by Molly McAdams. It was good but also really sad and it made me think of things differently.

A smashing, award-winning debut novel that introduces Charley Davidson: part-time full-time grim reaper.
Charley sees dead people. That’s right, she sees dead people. And it’s her job to convince them to “go into the light.” But when these very dead people have died under less than ideal circumstances (i.e. murder), sometimes they want Charley to bring the bad guys to justice. Complicating matters are the intensely hot dreams she’s been having about an entity who has been following her all her life…and it turns out he might not be dead after all. In fact, he might be something else entirely.

I'm sorry but I can't give you the descriptions of the rest of the books in this series but I will show you the covers cause...well...I love them!

Darynda also has a new YA book coming out!

Ten years ago, Lorelei’s parents disappeared without a trace. Raised by her grandparents and leaning on the support of her best friends, Lorelei is finally beginning to accept the fact that her parents are never coming home. For Lorelei, life goes on.
is not quite as painful as she thinks it will be, and things are as normal as they can be. Until the day the ’s designated loner, Cameron Lusk, begins to stalk her, turning up where she least expects it, standing outside her house in the dark, night after night. Things get even more complicated when a new guy—terrifying, tough, sexy Jared Kovach—comes to school. Cameron and Jared instantly despise each other and Lorelei seems to be the reason for their animosity. What does Jared know about her parents? Why does Cameron tell Jared he can’t have Lorelei? And what will any of them do when Death comes knocking for real? Thrilling, sassy, sexy, and inventive, Darynda Jones’s first foray into the world of teens will leave readers eager for the next installment.

To celebrate our anniversary Darynda would like to give a book to 1 person! The winner can choose a book of their choice by Darynda including the 2 coming out in October!
This is International!
All giveaways this month end October 7th.

a Rafflecopter giveaway
Posted by Cynthia Garcia at 4:17 AM