Okay! Are you guys ready! Book nerd moment for me! Today we have my ALL TIME FAVORITE adult author....the one...the only...
JACQUELYN FRANK!!!!!!!!!!!!!!
OMG omg okay breathe Cynthia breathe. *whew*
I have the first 13 books by Jacquelyn personally signed to me and I have all of her books on my Kindle. I love love love her. Seriously if you haven't read anything by her then I highly suggest you to.

So here is what I am going to do for YOU! Especially those of that have not read any of her books. I am going to show you guys the 1st book in each series. 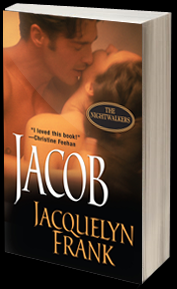 Jacob the Enforcer belongs to one of the many Nightwalker races that thrive on the dark of night. He has a job to do for his species and it's rather straightforward. He polices his people. During the full moon their animal urge to mate overcomes them, and if they stay within their race they never need to encounter the Enforcer. But if they cross the line and turn their lust to another species...say humans...it's Jacob's duty to prevent them and then to punish them severely for it. As this 'madness' grows worse and worse for his people, there is hardly a family who hasn't felt the brutal sting of Jacob's justice. Punishment is so dire and so feared, Jacob can call very few others his friend and the life the Enforcer leads is a very solitary one.
Then one night during a hunt for one of his own, he encounters the first human woman who will tempt him in all of his 622 years of life. Isabella is a simple Bronx gal who works at her local library, lives with her sister and owns a cat.
She hardly expects a night of moongazing to change her life forever and send her falling for a man like Jacob in all kinds of outrageous ways. Heck, she certainly doesn't expect that he isn't exactly a 'man'... although he sure looks like one, smells like one and boy-oh-boy does he feel like one!
As for the Enforcer, Jacob finds himself tempted beyond reason, needing Isabella to the point that he begins to strain against every law he has always upheld.
But before long the couple finds themselves fighting for their lives against evil, Jacob's bretheren, and even their own desires for each other. How can they find the way to resist one another before Jacob faces his own punishments...or before Bella ends up dead, torn up from the animal passion inside of him that she, as a human, is too frail to ever endure? 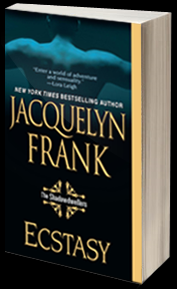 At one with the darkness, the mysterious Shadowdwellers must live as far from light-loving humans as possible in order to survive. Yet one damaged human woman will tempt the man behind the Shadowdweller throne into a dangerous desire…
HER WORLD IS TOXIC TO HIM, AND SO IS THEIR ATTRACTION
Among the Shadowdwellers, Trace holds power that some are willing to kill for. Without a stranger’s aid, one rival would surely have succeeded, but Trace’s brush with death is less surprising to him than his reaction to the beautiful, fragile human who heals him.
By rights, Trace should hardly even register Ashla’s existence within the realm of Shadowscape, but instead he is drawn to everything about her—her innocence, her courage, and her lush, sensual heat…
After a terrifying car crash, Ashla Townsend wakes up to find that the bustling New York she knew is now eerie and desolate. Just when she’s convinced she’s alone, Ashla is confronted by a dark warrior who draws her deeper into a world she never knew existed. The bond between Ashla and Trace is a mystery to both, but searching for answers will mean confronting long-hidden secrets, and uncovering a threat that could destroy everything Trace holds precious … 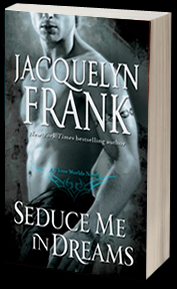 SEDUCE ME IN DREAMS
A Three Worlds Series

From the New York Times bestselling author of the Nightwalkers and Shadowdwellers series, Seduce Me in Dreams begins a sexy new futuristic series featuring an elite group of military heroes.
Dark. Mysterious. Sensual. When Bronse Chapel, the commander of a specialized unit of the Interplanetary Militia, begins to dream about a beautiful and exotic brunette, he wants to dismiss it as being induced by lack of sleep…or perhaps lack of sex. But his instincts tell him it’s something different, something far more dangerous.
Ravenna is the leader of the Chosen Ones, a small group of people from her village born with extraordinary powers. She doesn’t know that draws her to Bronse’s dreams night after night, but she senses that he and his team are in jeopardy. Ravenna can help him, but first Bronse must save the Chosen Ones from those who plan to use their powers for evil. Together, Bronse and Ravenna will be unstoppable. But Ravenna is hiding something that could endanger them all. 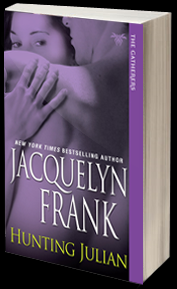 Jacquelyn Frank, New York Times bestselling author of the Shadowdwellers series, invites readers into a dazzling new world of unstoppable desire and danger..
As an Advocate for his colony, Julian Sawyer travels to Earth to bring back the Chosen—women who possess energy potent enough to help revitalize his people. The stunning, silver-clad beauty who strides into his club one night radiates a sensual magnetism unlike any he’s encountered, and Julian realizes that Asia Callahan is not just Chosen, she is his kindra: his one true mate.
For months, Asia has tracked the beautiful and mysterious Julian across the country, convinced that he’s behind the disappearance of her sister and a dozen other women. She’s prepared to believe he’s a ruthless killer, but when she presents herself as bait, she discovers that the truth is far more shocking. Taken to a strange, hazardous realm she never knew existed, Asia will face the ultimate choice—between abandoning the life she’s always known, and forsaking a passion as dangerous as it is powerful. 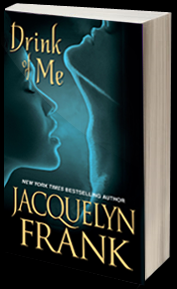 
In a world where emotion can be a deadly weapon, one slight, battered runaway holds the key to a dark and twisted enigma…
Drink of me, she whispers, her silver eyes trusting, pleading. What female dares speak such words to one of the Sánge? His people are scorned by every race for their fierce sensuality, their fearful rituals. And as Prime, Reule is the most telepathically gifted of them all.
But nothing has prepared him for the intensity of emotion radiating from the outlander rescued by his Pack. Terrified, tormented, but beautiful beyond measure, Mystique shatters his legendary control. As she reaches for him in the steamy heat of the healing baths, he knows this blind need can have but one end…
In blood, in knowledge, in ecstasy. 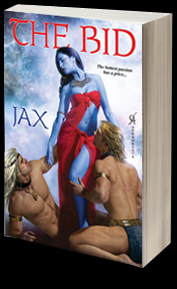 Strapped and chained on the block, a masterpiece of naked flesh and muscle turns slowly…the eyes of the crowd devour the sight of Vejhon, whose platinum-white hair and cat-green eyes mark him as newly captured from a wild planet on the outer edges of space. The noble men and women erupt in a bidding frenzy—that finally stops on a man named Najir. This strikingly handsome man who strangely resembles Vejhon cries out the winning bid on behalf of the lady he serves. Hanna Drakoulous now has a matched pair of the finest males in the galaxy…

Shackled, Vejhon can only marvel at the mysterious beauty with blue skin and shining eyes whom Najir clearly worships. But Vejhon refuses to humble himself—until Hanna’s kiss strikes him like lightning. First dominant, then sensually tender, she arouses him to explosive sexual passion that goes beyond the limits of physical pleasure. What manner of mistress has bought him and what does she want? Freedom is what he wants, but will she be worth the price?

Jacquelyn would like to give 1 person a copy of Jax (The Bid)!
This is US only. If you are International and have an address you can use please enter.
All giveaways this month end October 7th.


a Rafflecopter giveaway
Posted by Cynthia Garcia at 4:14 PM