Today with have author Shannon Dettemore and she would like to share an excerpt of Angel Eyes. 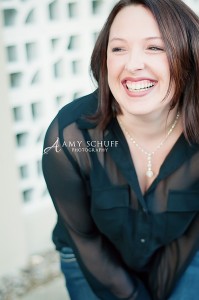 Shannon is a wife and mother. A sister. A daughter. A friend. She was raised in Northern California by her parents—pastors of their local church and constant figures of inspiration.
As a youth, Shannon traveled with an award-winning performing arts team, excelling on stage and in the classroom. As a young adult, she attended Portland Bible College, continued acting, and worked with an outreach team targeting inner-city kids in the Portland-Metropolitan area.
It was in Portland that she met her husband, Matt. They were married in 2002. Soon after, they took the reins of the youth ministry at Living Way Community Church in Roseville, California where they continue to serve in that capacity. In October of 2004, their son Justus was born, followed by their daughter Jazlyn, born in 2008.
ANGEL EYES was Shannon’s debut novel and the launch of a young adult supernatural trilogy. It was published in the summer of 2012 by Thomas Nelson. The sequel BROKEN WINGS will be on shelves in February of 2013.


From Angel Eyes by Shannon Dittemore
“Put it on your head,” Jake says. A tremor runs through his voice, but there’s a challenge there, I think.
Do I dare?
I think I do.
My eyes on Jake, I take the halo in both hands and place it on my head. The effect is instantaneous. Warmth trails down my body, just like the nights with the halo tucked under my pillow.
My toes nestle into my shearling boots, my shoulders sag, and my eyes flutter.
“Eyes open, sleepyhead.”
I force my eyes open and shudder. The nearest limb of the willow tree, the one hanging just inches from my face, is now orange. At first I think it’s a trick of the light—that the evening clouds have parted for a glimpse of the yellow sun—but then, it isn’t just the tree limb.
Before me, Jake’s face, his chest, his shoulders and arms—in front of my very eyes, Jake’s appearance begins to change. It’s like his flesh—his clothing even—is glowing. Oranges and yellows, violets and reds. Every surface hue rolling and spinning. It’s a dance. A dance of color and light.
And his eyes.
His hazel eyes are gone, replaced by white flames—twin blazes stirring within glassy orbs. Both frightening and beautiful. And then the fence and the grass are giving off rays of light as well. The stars, too, are brilliant, shining like tiny suns against the expanse of an ever lightening sky. The darkness of evening begins to fade, and soon the sky is gold and red.
The temperature increases, and my lungs begin to burn. I reach my hands out, steadying myself against Jake’s chest. But the movement jostles the halo, and it tumbles from my brow. A deafening bang assaults my ears, and the light vanishes, leaving me standing once again in a twilit cemetery. 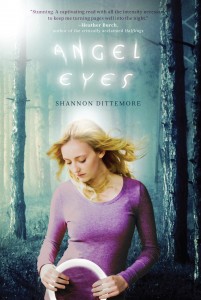 Once you’ve seen, you can’t unsee. Everything changes when you’ve looked at the world through . . .

Brielle went to the city to chase her dreams and found tragedy instead. She’s come home to shabby little Stratus, Oregon, to live with her grief and her guilt . . . and the incredible, numbing cold she can’t seem to shake.
Jake’s the new guy at school. The boy next door with burning hands and an unbelievable gift that targets him for corruption.
Something more than fate has brought them together. An evil bigger than both of them lurks in the shadows nearby, hiding in plain sight. Two angels stand guard, unsure what’s going to happen. And a beauty brighter than Jake or Brielle has ever seen is calling them to join the battle in a realm where all human choices start.
A realm that only angels and demons—and Brielle—can perceive.

Shannon would like to giveaway 1 copy of Angel Eyes!
This is International!
All giveaways this month end on October 7th.

a Rafflecopter giveaway
Posted by Cynthia Garcia at 9:31 PM