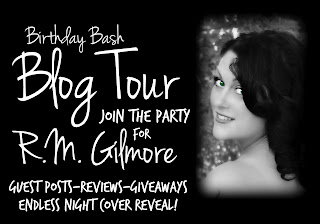 I am happy to be part of R.M. Gilmore's Birthday Bash! We are here to celebrate her 1st (of many) 29th Birthday!!

R.M. is here today to talk to us about 80's vampires. I was really excited when she brought up this topic and jumped all over it! Like a lot of other people I enjoy reading and watching vampire stories but vampire's in the 80's are the best so far.

Before I give the reins to R.M. here is a little about her:

Raised in Central California, bred from two very young parents, I have fought hard to get where I am today. Which isn’t saying much since I haven’t come very far. But, I do my best. I married my best friend October of 2011 and published my first novel in 2012, not too shabby I guess.
I started writing almost four years ago. Dylan Hart was my first character and I fell in love with her immediately. Since, I have created, and am currently working on, a number of different works. All varying from supernatural thrillers, to biblical apocalypse, to the life of a young punk just trying to drink, smoke, and survive. Short stories are regularly being pumped out as well. All are lying in wait for the perfect time to be unleashed.
Aside from writing, I also paint. In fact, painting was my first passion. I operate an online store where I sell my original artworks. Just as the characters I drudge up, all paintings I’ve finished have their own identity.
I definitely consider myself to be “unconventional”  (“conventionist.”) I also have an affinity for cult films. I love movies and could watch horror all day, everyday. My heart lies with vampires but I never turn away a good monster, slasher, ghost, or otherwise otherworldly plot. Thanks to my lovely husband I watch Trailer Park Boys nearly everyday. Along with, Roseanne, Ancient Aliens, Decoded, and SVU. Just to name a few.
My life revolves around humor. If I’m not laughing at something or someone then I must be dead. Let’s hope that doesn’t happen anytime soon.

Now enough from me... take it away Birthday Girl!

No one living on this earth who has any knowledge of Kiefer Sutherland could bypass this intro without a quote from my favorite fanged bad boy. "How are those maggots?". No wait, that's not right..."Now you know what we are, now you know what you are. You'll never grow old, Michael, and you'll never die. But you must feed!". There we go, that's better.

No other decade in the last century has seen a better borage of vampires than the 1980's. Granted, the 1950's through the 1970's was flooded with what passed for horror and more than one Dracula surfaced during that time, but it didn't have the quality that came later in the 80's (With the exception of Salem's Lot and the first of the Vampire Chronicles, but we're mostly talking movies here so we'll leave the books be. No matter how awesome.). Or the soundtrack. Let's face it everything was better in the 80's. The toys, the TV shows, the music, the clothes! As such, 80's vampires brought me into this decade with an uncontrollable need...to feed! Just kidding. But they did open up my brain to the world of vampires and helped pave the way for characters like, Dylan Hart, to emerge from my imagination and make her way to the written word.

A vampire in the 1960's would generally appear as your "classic" dime store Drac. Widows peak, popped collar, a trio of lusty vamp tramps by his side. The 80's blood sucker on the other hand could rock any ensemble, although, a leather jacket was usually a must. As was the mullet. The vampire mullet is the only acceptable form of that particular hair style, period. In Near Dark we got to see vampires in cowboy boots and spurs. Young Mae in her ode de Duke cut-off shorts and cliche rope-belt and Severen's sexy boots with the spurs, "finger lickin' good". Yes, vampires could even be yuppies in the 80's. Well, maybe. In my favorite "vampire" movie, Vampires Kiss, Nicolas Cage made us question his sanity and the concept of vampires in our reality all the while rocking his three piece suit and fake accent. Something I found VERY intriguing. Even fashion forward David Bowie graced the vampire scene in, The Hunger, in 1983. (<--- Very under rated, but killer flick!)

The Lost Boys introduced us to the bumpy-faced vamp far before Buffy the series rolled onto the small screen and Jim Carry showed us vampirism could be hilarious in Once Bitten. But if one of these stellar fanged-ones stepped into the blazing sun he, or she, would sizzle like a juicy strip of bacon. They would not glitter like a flippin' disco ball. With the exception of the half-ies, however. Half vamps could walk in the day and pass for human no prob. Your best friend could've become a neck-biter and you may have never guessed, as we discovered in the quirky high school vamp flick, My Best Friends a Vampire. Hell, one might even be sitting next to you in Chem class.  But if he nailed his first killed, even just one little taste of human blood, he's history pal. While you might not find a full-fledged vampire, say, enrolled at your local high school, you would definitely run into one at your local watering hole. 80's vampires frequented nightclubs and bars far before Fangtasia came along. Only, they weren't exactly invited with open arms. For the most part, they were there posing as your everyday average human being, just looking to hunt you down for a sip of your  precious blood. Or, they chased a couple of high school kids into one...also hunting, however. Jerry Dandridge taught us we weren't even safe in the sanctity of a poorly lit nightclub, let alone that dark alley over there. And we learned to never take home the pretty lady for a late night tryst or you might wake up thinking you've been turned into a "vampire" in, Vampires Kiss. Lauren Hutten even busted a move as, the Countess, in, Once Bitten.

With all the differences in vampires the 1980's brought us, there was always one underlying factor, blood lust. I guess you can't really have vampires without it. Or stakes and hammers for that matter. A vampires gotta drink, a human's gotta live. Whether it be a stake, our friend the sun, lack of virgin blood, or death by stereo  blood suckers must all meet their maker at some point. No one lives forever, and despite the general consensus history has proven, even vampires bite it eventually. In the end, the 80's taught us one vital lesson about vampires. "When a vampire bites it, it's never a pretty sight. No two bloodsuckers go the same way. Some yell and scream, some go quietly, some explode, some implode, but all will try to take you with them."

There are no such thing as vampires, fruitcake!

I think this is one of the best things ever! To help celebrate her birthday I would greatly appreciate you guys to go check out her books.

In the opening novel of R.M. Gilmore's
'Odyssey of the Occult' series, entitled "The Scene", we find Dylan Hart in her hometown of Hollywood, California. The bodies of seven exsanguinated prostitutes have been found from the Central Valley to Southern California. The media has dubbed them the "Vampire Massacres".
Dylan has decided to cash in on the tragedy and write a true crime novel. She begins her odyssey with research into the underground vampire lifestyle. All seemed to be going as planned, and as long as fiction can keep its ass away from fact, she should be alright.
But let's face it, someone is draining women of all their blood.
There is no way in hell it's going to end pretty.

Country girl paranormal novella from author R.M. Gilmore (author of the Dylan Hart Odyssey of The Occult series). A new twist on an old classic. Havana, Arkansas isn't exactly the picture of mystics and magic, but Lynnie Russell learns quickly you can't judge a book by it's cover. She discovers myths and legends are alive and well in her tiny little town and she is at the center of it.


And what's a Birthday Bash without a giveaway?


a Rafflecopter giveaway
Posted by Cynthia Garcia at 9:34 AM