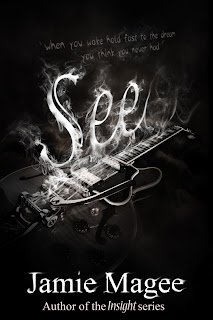 Forgetting who you are, your ambitions, your love is crippling….but remembering – embracing your purpose with a new sense of determination is more than empowering….its life altering. Charlie Myers is on a life altering path that will cause the dammed to humble in silence…

One night…just a few friends how could it go so wrong? That was the question seventeen year old Charlie Myers was asking when she found herself in the ER. Outwardly nothing was wrong with Charlie, she was a vision of perfect heath, internally she was battling a raging headache…one the doctor told her she would overcome shortly, but Charlie knew something else was wrong …very wrong.

Part of her had been stolen….she was missing memories. Those memories were sacred. They held the key to her sanity. They told her that the sinister whispers, the shadows that came to life before her were not as ominous as she felt they were. They held the bond with her late father, a famed musician. They caused her to forget the one talent that allowed her to face the darkness that haunted her every waking hour. They also masked a much deeper bond, the face of the one that had stolen her heart, long before the age of seventeen.

Sitting in the ER with her angry mother she couldn’t figure out what she missing – or even how. Her thoughts told her that she needed to protect Britain, a friend of hers, but that didn’t make any sense – Britain didn’t need to be protected from anyone, he was strong, young, and absurdly wealthy. Charlie also knew that even though her friend Bianca called Charlie her best friend that she didn’t trust her ….she was almost sure she despised her, but she couldn’t figure out why – or understand how random thoughts were telling her that she adored both Britain and Bianca – that they were her saviors – that they brought silence to the unstoppable whispers….but the silence scared Charlie. In her mind anyone or anything that could bring silence to something that dark could not be good.

Charlie wanted to stay in NY, figure out what she was missing, why, and who was behind it all, but her mother had other plans. Against her will, Charlie was sent to Salem to live with her sister….within that small town Charlie found her memories….and so much more.

As most of you know Jamie's first series, The Insight series is my 2nd favorite YA series but now after reading SEE and don't know which one is my favorite.

SEE is somewhat on the same basis as Insight. You have true love or soul mates, the main characters wanting to help "people", and totally hot guys! And guess what? There are twins in SEE! But, that is where the similarities end. SEE, to me, is darker and I love that!

This book will completely hook you. Before you know it you will be 100 to 200 pages into the book and wonder where the time went. Within the first two pages it had me captured and I didn't want to put it down. For me it's hard to find a book like that so I was thrilled when this one did.

Like I said SEE is dark but it's also intriguing, thrilling, captivating, and suspenseful. And for all you music lovers...music is a HUGE thing in this book. That's a plus in my book.

Now! On to the giveaway. At this stop during the tour Jamie is offering 1 lucky person an e-copy of SEE, a bookmark, and an awesome SEE guitar pick. Just fill out the Rafflecopter below to enter. Giveaway ends on Friday the 18th.

For the entire tour Jamie wants to give away a printed/ signed copy of SEE and Insight (her debut novel) along with bookmarks and picks - as well as a $25 amazon gift card. In order to enter for any of this you have to comment on this post. For the big prize Jamie will draw from all of the comments on the tour. The more stops on the tour you comment on the more your name goes into the pot! To gain an extra entries you can follow Jamie's new blog at http://authorjamiemagee.blogspot.com and/or like and comment on her FB page telling her what awesome blog sent you her .way ( http://www.facebook.com/Insight.Jamie.Magee?ref=tn_tnmn ). In your comment let us know if you did any of these!