Today I would like to introduce you to Brea Essex, author of the brand new book Foreshadow. She is here to tell us her goals for the upcoming year. Take it away Brea! New Year, New Series
Well, Christmas is behind us and New Year's is fast approaching. I can't believe 2011 is almost over! It's been a whirlwind of a year for me—I moved, signed my first contract, and published my first book among other things.
In honor of the new year, I'm going to be working on a new series. My current series, The Shadow Imperium, will be continued, but I will also be working on another called The Zayin Chronicles. Some of you may have already heard me talking about book one of The Zayin Chronicles, called Ouroboros. Here's the blurb for it:
Imagine waking up in the hospital to find someone in your room that only you could see.
When eighteen-year-old Rhiannon wakes from a coma after a rock-climbing accident, she finds a strange guy in her room.  He seems to be invisible to everyone—and he needs her help.
Zac is a Zayin, one of an elite fighting team.  The problem is:  he’s dead.  He needs Rhiannon’s help to find his body so he can stop the self-proclaimed Prince of Death—The Necrovorst. Can they stop The Necrovorst before he unleashes his demons and destroys the world?
With a new series, comes new goals. 2012 is my year of a million words. That's right, I'm planning on writing 1,000,000 words of fiction next year. It breaks up to approximately 2,740 words per day, if I write every single day. Think I can do it? I have my calendar, I have my gold stars. I'm going to use them as a reward system, because I'm very visual/spatially oriented. It would drive me crazy to have a pattern messed up.
So, those are my goals for next year: one million words, current series, new series. What about you? Any goals? Any resolutions? After all, new year's is the perfect time to make them...
Thank you Brea for stopping by! My goal for the next year is to finish my 1st YA book.
If you haven't check out Foreshadow please do. I will be reviewing it shortly. You can find it at Amazon, Barnes and Noble, and Astrea Press for $2.99. 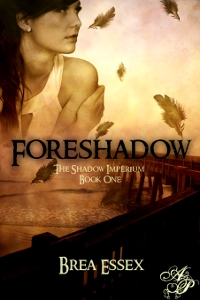 Imagine discovering that your boyfriend was out to kill you—and that the annoying boy from school was your guardian angel.

Rae Davenport has already lost her mother. The only thing keeping her sane is her new boyfriend, Andrei—that is, until she finds out that he wants to kill her. Andrei is a devil, and he wants to use Rae as a sacrifice to get back into Heaven. The only one who can save her is Logan, her guardian angel. He’s only annoyed her in the past, but now he will be her savior.