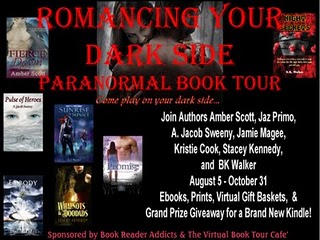 Thank you to everyone who participated at this stop. Don't forget to stop by as many stops as possible during the tour for more prizes and a chance at the grand prize....a Kindle!

The winners for Sunrise at Sunset by Jaz Primo are...WINNIE and DAWNMOMOFFOUR!

The winners of Fierce Dawn by Amber Scott are... NIKKI and INLOVEWITHTWILIGHT7!!
**All winner's were chosen using Random.org**

I emailed all the winners. Congrats!

The man who haunts her dreams enters her reality, claiming she's transforming into a changeling--not quite immortal but no longer human.

Battlelines are drawn and blood spills as the two fight not only for her life, but for mankind's as well.

We vampires are focused and tend to shape our own realities. My name is Katrina Rawlings, and I am a vampire. I declare that with neither pride nor ego. I am simply nature's most dangerous predator. On occasion, it's a very valuable quality. It helped me protect Caleb Taylor one day when he was very young. But that single, traumatic day is behind him now; wiped from his memory, or so I hope. Caleb has finally matured into a rather striking young man, and believe me, I like what I see. I'll readily admit that there are issues for us to confront and overcome, though a sense of mutual commitment isn't one of them. I'm feeling hopeful for our future together, in fact. But an adversary from my past has returned to haunt me, and she's trying to get back at me through Caleb. That was her first...and last...mistake. I'll protect my Caleb at all costs, and I'll make her regret the day she was born. So, I suppose that I'm not just a vampire. I'm about to become someone's worst nightmare!
Posted by Cynthia Garcia at 8:37 AM