I am so excited that Brenda allowed me to help reveal the Onyx Talisman cover today! I am so excited! I can't wait to read it! Are you ready to see it? It is beautiful!!! 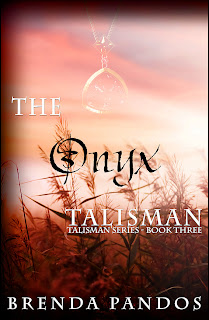 The Onyx Talisman, third and final book in the Talisman trilogy.
Publisher: Obsidian Mountain Publishing
Tentative Release Date: 11/16/2011
Follow Brenda on Facebook: http://www.facebook.com/pages/Brenda-Pandos-Author/147707291958883
Goodreads: http://www.goodreads.com/book/show/10233236-the-onyx-talisman
Twitter: @brendapandos
Blog: brendapandos.blogspot.com
**WARNING SPOILERS**
All was perfect in Julia’s life until Nicholas had his vampire blood-lust activated by his mother Alora, her immortal enemy, turning him evil and bent on revenge. Heartbroken and out of choices, Phil and Julia ran away in the middle of the night, with Scarlett on foot, to Orange County to warn and plead Nicholas’ Godfather for help. Once arriving at Harry’s though, the local coven accosted them and they narrowly escaped.
After they returned home, there was a huge showdown between Phil, Nicholas, Scarlett, Alora, Katie and Julia. Alora almost got what she wanted—Julia’s vampire warding talisman—but Preston, Nicholas’ father, and Harry came to the rescue. They escorted Nicholas and Alora back to Beverly Hills, pledging to return Nicholas free from his blood-lust. But all Julia’s received in the past four months is a letter stating Nicholas missed her along with some song lyrics and promise of a quick return. That was a month ago.
Now Julia awaits Nicholas’ return with the Fab Five Coven: Phil and Katie—the sober vampires, Scarlett—the half-vamp/shape-shifter, and Tyler and Julia—the inducted humans. She’s stuck in Scotts Valley with Phil as her self-appointed chaperon and no way to return to Los Angeles to check on Nicholas. Only Scarlett and Julia know her fate ultimately involves the demise of all vampires, possibly including the ones she loves. When the time comes, will she even have a choice?
Find out in the final installment of the bestselling Talisman Series November 16, 2011!
Want to know more? Check out Brenda’s blog at: http://brendapandos.blogspot.com
To see my review for The Emerald Talisman go here: http://www.facebook.com/photo.php?fbid=147307261992252&set=a.114194208636891.15475.111740428882269&type=1